Another blog from the archive - this one was written for the Scottish Book Trust, who asked me to pick 5 underappreciated thriller gems. 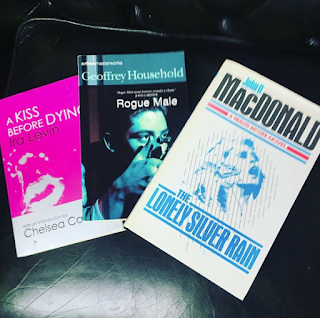 Like many crime writers, I'm also a music lover. As any music lover will tell you, while it's sometimes nice to enjoy a massive stadium act along with everyone else, it's even more gratifying to be into a more obscure band that feels like your little secret.

Books are like that too. Every once in a while you'll pick up an interesting-looking thriller in a charity shop because the cover looks intriguing. Sometimes you’ll try a new author because someone else you admire once namechecked them in an interview. If you’re lucky, you discover an underrated gem.

Some of the books on my list of forgotten crime classics are like that. A couple of them inspired films that went on to eclipse their literary source in the public consciousness. Others are the kind of books that have been well-kept secrets for so long that they're probably not really secrets, or forgotten. But it's safe to say you probably won't find any of these in your average airport bookshop.

So while it's great to read the Rebus series or LA Confidential or Gone Girl and appreciate them with the rest of crowd, here are some alternative picks that are a little off the beaten path, but no less rewarding for that.

And you'll be able to impress people at parties with your offbeat tastes. As long as the parties you go to are populated with people who read thrillers, that is. But let's face it – aren't they the best people to party with?

3) Ira Levin - A Kiss Before Dying