My episode of Written in Blood - this Tuesday on CBS Reality 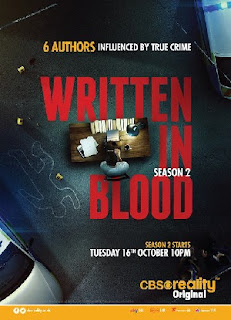 My episode of Simon Toyne's true crime series Written in Blood airs this Tuesday night on CBS Reality in the UK.

I was intrigued when Simon asked me to be part of the show, as I'm a big fan of his Solomon Creed books, and it sounded like an interesting thing to be part of. Plus, I got to create a folder in my emails called 'Television', which was nice. 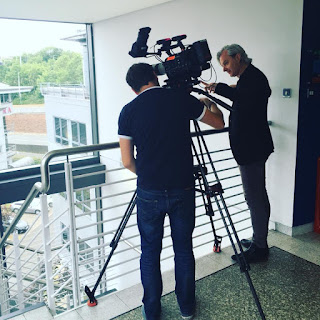 I had previously spoken to the team about being part of season one, when the brief was that crime writers would talk about a case that influenced one of their books. Back then we looked at covering the Washington Sniper case, which was in my mind when I was writing Killing Season, but the idea was nixed as the focus was on UK crimes.

For season two, the remit was broader: crime writers talking about a case that was local to them. When they asked if I knew of any suitable cases, one came to mind immediately.

I grew up in Cambuslang, a suburb on the south-east side of Glasgow. I remembered people used to talk about a pair of murders that happened when I was very young. In fact I was sure I remembered that one of them had taken place very close to my childhood home. I mentioned the case to the researcher from CBS Reality and she agreed it sounded like a potential case to cover. I had a look online, and found surprisingly little about the case; just a couple of retrospective articles.

Those confirmed I had been right, though. The killings - vicious, apparently motiveless murders of lone women - took place in the autumn of 1982, when I was three years old. The first of the two victims, a female taxi driver, was found in her car in Braeside Place, the street behind the back garden of the house where my family lived. I remembered there was a gap in the fence where I used to cut through on my way to the shop.

The articles referenced other developments in the case, including the discovery of a second victim, found on the railway embankment beside my old primary school.

I asked my dad about the night the taxi driver had been murdered, and he told me about being awoken in the middle of the night by the blue lights as the police investigated the scene. They had come around our street to canvas for witnesses the following day.

Surprised there wasn't more online, I decided to go old-school. I went to the Mitchell Library in Glasgow, where they store a vast archive of old newspapers on microfiche. 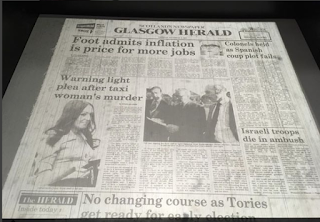 I spent a couple of evenings scrolling through issues of the Glasgow Herald and the Evening Times from 1982 and early '83. It was fascinating seeing the case unfold against the backdrop of the time: turmoil in the Middle East, a Thatcher landslide in the '83 general election, the USSR sabre-rattling, the Troubles still simmering away in Northern Ireland. Some familiar trends, some that seem further away than a mere four decades.

The murder case was covered sporadically over the weeks and months, in brief updates as the police closed in on a suspect. Only the occasional front page. It was unsettling to discover how many of the locations relevant to the case were places I had frequented growing up, and still pass by on a regular basis today. The killer and one of his victims both lived on the street my family later moved to.

The media was different in those days. Murders were out of the ordinary, of course, even though the crime rate was far higher in the early eighties than it is now, but absent the 24-hour news cycle, it didn't have the sort of blanket coverage that a similar case would have now. The term "serial killer" didn't have the currency it does today. And, of course, there was no internet, no social media. The crimes were reported, updates would surface every couple of weeks, and eventually a suspect was arrested, tried and convicted.

The case wasn't a constant topic of conversation when I was growing up, or anything like that, but it was there in the background. Reading the coverage of the case made me think about growing up, not exactly in the shadow of these vicious crimes, but knowing from an early age that bad things could happen where you lived. Almost literally in your back yard, in my case.

Do I write crime fiction because I grew up with that awareness that evil can lurk in the most innocuous settings? It's impossible to say.

Perhaps it's one of the reasons I've always been fascinated by the way psychopaths can blend in, hide their true nature from the everyday world. The way relatives and friends and neighbours always express disbelief and confusion when they find out there was a monster in their midst. The shattering of the easy, comforting illusion that "this kind of thing doesn't happen here."

You can see the whole story this Tuesday night. 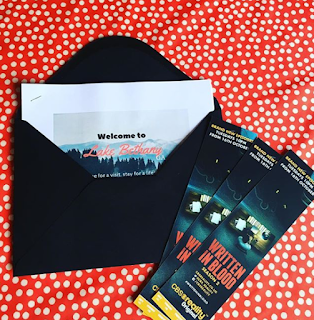 A big thanks to everyone who entered both the Facebook and the Readers Club competitions to win Written in Blood bookmarks and other goodies.

Winners came from as far afield as Singapore and the Netherlands - one of the best things about this gig is finding out you have readers in places you've never been.

The Facebook winners were posted earlier this week on my page - incidentally, go like the page, if you haven't already.

Members of my Readers Club who won a signed deleted scene from Presumed Dead and a set of snazzy Written in Blood bookmarks were:

...and the winner of the special, Readers Club-only grand prize of the bookmarks, deleted scene and a signed US hardcover edition of The Samaritan was Michael Chapleo. 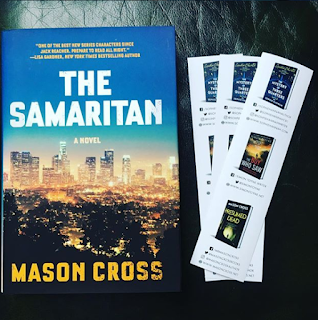 Congrats to the winners, thanks to all who entered, and if you'd like to know about my next Readers Club exclusive, you can sign up for free right here.

If you're in the UK, my Written in Blood episode airs on CBS Reality on Tuesday evening - I'll be doing a live Twitter Q&A during the show, so feel free to tweet a question.
Posted by Mason Cross at 10:00 No comments:

My publisher has finalised the mass-market paperback cover of Presumed Dead, complete with a fantastic quote from the excellent Jenny Blackhurst. Check it out: 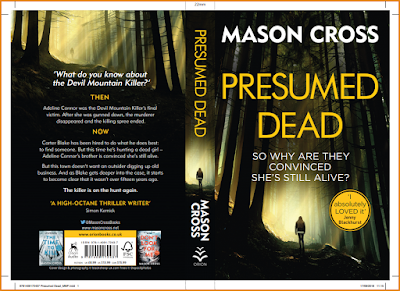 You can preorder the UK paperback in the usual places like Waterstones and Amazon now, and it will be in the stores from 29th November.

If you absolutely can't wait, you can get the slightly more expensive trade paperback or ebook right now. I won't stand in your way.

Back soon with some information on a slightly different sort of book for 2019...
Posted by Mason Cross at 09:43 No comments: