Win an advance copy of The Killing Season

Orion has just launched a book giveaway on Goodreads.com to win one of ten advance review copies of The Killing Season.

These copies have been produced specifically for pre-release publicity, and feature a very cool embossed and die-cut alternate cover:

To be in with a chance of winning one of these limited edition goodies, all you have to do is go to this link to visit the promotion page on Goodreads and then click on 'Enter to win'. Entries close on March 1st so be sure to sign up before then.

While you're there, you can also have a look at my author page, and if you're feeling particularly generous, you can also click 'Want to read' to place The Killing Season on your to-read shelf.

I had intended to blog on Monday to mark the point when it was exactly 100 days until The Killing Season is published on April 24th. Lots of things got in the way this week, so instead I'm going to mark the all-important 96 day point.

There are lots of things to keep me busy over that time. I'm currently doing the rewrite on the second Carter Blake book. Once I've finished that and sent it back to my editor, I think I'll blog about the experience of writing a sequel, and the unique challenges of writing That Difficult Second Novel.

The website is up and running now, and although it's fairly sparse at the moment it means I have somewhere to add news and events in the run-up to the end of April. Talking (typing?) of which, I've already been asked to come to a couple of crime and literary festivals, which will be fantastic. I'll post the details here and on the events page when everything's finalised, but for now I can say I'll definitely be in Bristol for CrimeFest in May. Looking forward to catching up with some of the readers and authors I've already met and saying hello to some new ones.

My editor got in touch yesterday to say that, several months after Orion put in the request, we've been granted permission to use a couple of Paul Simon lyrics in the book. I'd resigned myself to doing without and had stripped them out of the final version, but I'm happy to be able to include them after all. I've always liked song lyrics in crime fiction, I think that (used sparingly), they can really add something to a book. On more than one occasion, I've bought an album because I liked the way an artist's words were sampled in a novel. Which I think is a pretty sensible argument for allowing portions of songs to be used by authors free under fair use, but I guess this is where I differ with the record industry.

The final exciting thing on the horizon is unrelated to the book. After well over ten years of intermittently submitting short stories and having them politely rejected, I've sold my first story to Ellery Queen's Mystery Magazine. It's not a Carter Blake story, and in fact it's a story I only submitted on a whim, really not thinking it would get anywhere. Not for the first time I've realised that I have no idea what's going to work and what isn't. Just goes to show it's always worth throwing your hat in the ring, and that it pays to be persistent.

Long before I ever tried to write a full-length novel, my ambition was to sell a story to one of the big mystery magazines. EQMM has published so many legends from Agatha Christie to Stanley Ellin to Stephen King to Michael Connelly, and it's daunting (in a good way) to think I'll be joining that list.

When I know which issue it's going to be published in, I'll post the details here. It's beyond cool to be selected for a magazine with such a storied history, and I can't wait to see the story beneath one of those fantastic old-school pulp covers. Maybe even one a little like this classic: 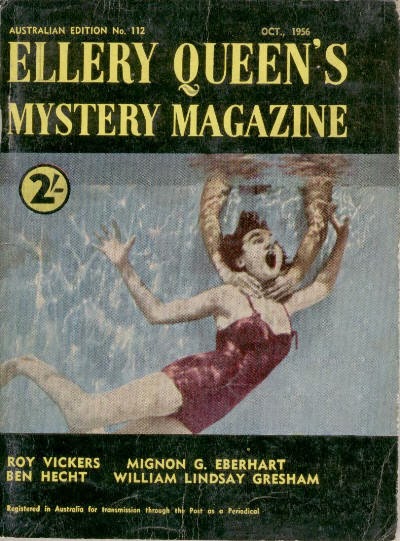