Who the hell is Alex Knight?

So it's May, and my new book has usually appeared by now, and some people having been asking where it is.

Well, the bad news is there is no Mason Cross novel this year.

The good news (hopefully) is that I do have a new book coming out.

It's under a different name. Why? A few different reasons, some to do with marketing, but also because it feels like a different kind of thriller than the ones I've written up until now.

It starts with the protagonist, Jake Ellis, being woken by banging on the door.

Molly, the teenage daughter of his girlfriend is there, covered in someone else's blood. Her mother has been shot, she thinks she's dead.

Shocked, Jake reaches for his phone to call for help, but at that moment it lights up with a notification.

It's an Amber alert. A child has been abducted, the suspect is armed and dangerous. The child is Molly.

The suspect's name is Jake Ellis.

It's called HUNTED, and here's the cover. 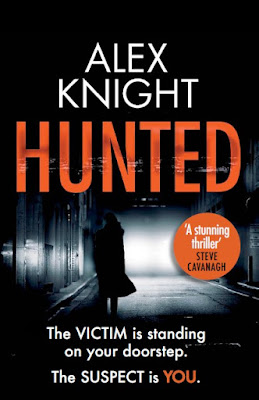 Check out the Alex Knight website for more, and you can pre-order the book in the UK  right now from Waterstones, Amazon and Hive (Hive is a particularly good option right now as it will help support indie bookshops when they need it most).

I hope you like this one. And if anyone has any ideas of a good way to launch a book in the middle of a pandemic, do let me know...
Posted by Mason Cross at 02:48 No comments: