I've been noodling away at my author website in spare moments over the Christmas break (you know, in between eating too much, drinking too much and watching Doctor Who). I'd held off doing much beyond a holding page until now for a couple of reasons: firstly, I had to write the second Carter Blake book, and secondly I didn't have a good web design tool, and the free ones I tried kind of sucked.

With its usual impeccable timing, it just so happens that Google managed to launch a beta version of Google Web Designer about a week before I thought to myself: 'Hey, I wonder if Google offers free web design software?' The answer is yes, and if you're willing to put up with a bit of head-scratching, trial and error and occasional screams of frustration (it is a beta, after all), it's actually pretty good. It's certainly a hell of a lot cheaper than shelling out for a Dreamweaver license, and I didn't find it as restrictive as Wordpress. 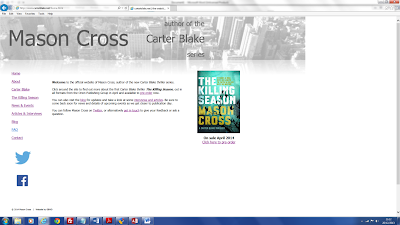 I've had a look at a few other author websites and included the basics, but this is very much a work in progress. As we get closer to publication, I'll be updating the content with new articles, upcoming events and news, and no doubt I'll be doing a bit of tweaking on the design as well. You can have a look at www.carterblake.net, and any feedback is gratefully received. It seems to display okay on Internet Explorer and Chrome, but any Firefox aficionados with a bit of time to spend looking around are more than welcome.

Short update this time; there's some cold beer and leftover roast beef sandwiches I have to get to post-haste.

Merry Christmas everyone, I hope Santa brought you some good reading material.
Posted by Mason Cross at 15:39 No comments:

Grizzly murders and the perils of quoting The Boss

I've just finished going over the final page proofs of the book, which means (to my extreme nervousness) that it's now pretty much set in stone.

﻿﻿﻿﻿One of the few advantages of not having a publishing deal before now is that I was able to write The Killing Season entirely to my own timescale. That meant I could really take my time over it and make as many changes and tweaks as I liked en route to what I amusingly believed was a final version.


I probably went through five or six drafts before it got to the point where I was happy to send it off to Thomas, my then agent. Since then it's been through another couple of rewrites with Thomas, and a further version with Jemima, my editor at Orion. It's been read by a copyeditor and a proofreader. A bunch of my friends have read it, as well as my new agent, Luigi. All of these people have fed back on it and helped to point out the little mistakes (as well as the not-so-little ones). All in all, you'd expect that it would be polished within an inch of its life by now, but reading the page proofs over this week, I still managed to find 37 new things I decided needed changing.

This ranged from minor continuity mistakes (such as referring to a 'cold October noon' which falls at the beginning of November) to minor formatting glitches to one embarrassing spelling mistake - on page 152 I found myself writing about a 'grizzly' manner of death. Since there were definitely no bears involved, I was glad to have caught this one.

One of the final changes was to remove a number of song lyrics. Another advantage of blasting out a publisher-less novel is the fact that you operate in a bubble of blissful ignorance of things like copyright law, and specifically how it gets complicated around song lyrics. Naively, I'd assumed you could quite reasonably include a line or two from a pop song in your book and it would be covered under fair use.

Not so. Quotations from song lyrics don't work quite the same way as literary quotations. For a start, nothing from the modern era (actually since 1923 or so, which is pretty much everything, pop-music-wise) is in the public domain. There is no fair use limit, so any part of the song other than the title is copyright. And the rights may be held by more than one party (songwriter, dead songwriter's estate, publisher etc). There's an informative article on the whole thing here, summed up by the author's advice: Don't ever quote lines from pop songs.

Orion flagged this up to me at the contract stage, and kindly offered to chase down the rights-holders to see how much it would cost to use the five or six song quotes I'd blithely tossed into The Killing Season. None of them were cheap.

So part of the process this week has been to surgically remove these expensive little samples and instead try to allude to the songs without directly quoting. There was one Bruce Springsteen lyric, however, that I couldn't bear to lose. It's from the song 'Nebraska' - I quote it in the epigraph and I like how it sets the tone for the book, so I decided that one was worth keeping. It worked out something like £36 a word for a two-line quote. Given the low-fi nature of that particular album, I've probably covered the production costs all by myself.

So the typos are fixed and the song lyrics have mostly been excised and I've made a few other little nips and tucks and now that's it. The next time I see The Killing Season, it'll be in a bookshop, which is exciting and terrifying and unbelievable all at once.

Thankfully, I won't have much spare time to worry about it. I need to get my basic website looking a little less basic over Christmas, and there's also the small matter of the revisions to Carter Blake book 2: The Samaritan, which my editor has now sent me. I'm told it's already in pretty reasonable shape for a Difficult Second Novel, but this time I'm under no illusions about how many more changes there will be between now and publication day.

And no, I haven't used any Springsteen lyrics in this one.
Posted by Mason Cross at 15:52 No comments: