Just a quick reminder that I'm going to be at Cambuslang Library this Saturday at 2:30pm if you're in the vicinity. I'm going to be reading from The Samaritan (which means I need to find a good excerpt soonish) and generally talking about writing, books etc etc. My last event there (it seems a bit grandiose to call it an 'appearance') was a lot of fun and really well-attended, so hopefully this one will follow suit.


Couple of other things...


Myself and fellow Orion thriller dude Steve Cavanagh are taking turns reviewing Amazon's new Bosch series based on Michael Connelly's acclaimed novels - my blog on episode one is up now at the Murder Room.


Also at the Murder Room, it's my turn to blog on John D. MacDonald's classic Cape Fear, aka The Executioners. If you're only familiar with the film(s) you should definitely check it out.
Posted by Mason Cross at 10:22 No comments: 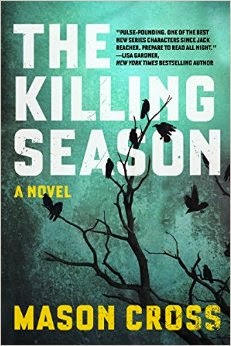 The Killing Season is published in hardcover in America today by Pegasus.

It's already had some great advance reviews in Kirkus, Publishers Weekly, Booklist and Library Journal and on US mystery blogs like Over My Dead Body, and now I can't wait to hear from readers in the spiritual home of pulp fiction.

It's a really big deal for me to be published in the world's biggest thriller market, and it's yet another milestone I dreamed about hitting when I was spending my nights writing this thing.

If you like the book, I'd love to hear from you. Reviews and telling a friend are very welcome too. If your friend happens to be Steven Spielberg or Clint Eastwood, that's even more welcome.

You can get The Killing Season in various formats in the following stores in the US:

“British author Cross makes a spectacular U.S. debut with this harrowing thriller. The gripping, intense pace and the intriguing characters will keep readers on the edge of their seats. Hope for a sequel!” (Library Journal starred review)

“Keeps the pace breakneck, the suspense high, and the body-count higher.” (Booklist)

"The suspense builds all the way to the breathtaking ending. Readers will look forward to seeing more of Blake." (Publishers Weekly)

"Pulse-pounding. Mason Cross launches into The Killing Season with no-holds-barred, as he deftly combines an adrenaline rush plot with one of the best new series characters since Jack Reacher. Prepare to read all night." (Lisa Gardner, New York Times bestselling author)

“Cross provides a gratifyingly high body count, ruthlessly efficient action sequences and all the other thrills you'd expect of the superior popcorn movie you can expect his first novel to spawn, right down to a nifty extra twist in the tail.” (Kirkus starred review)

I'm incredibly excited to have a story published in the new issue of Ellery Queen Mystery Magazine.
Before﻿ I ever attempted writing a novel, my big ambition was to be published in one of the classic mystery magazines. I submitted a lot of stories over the last fifteen years, and I finally managed to make it. Feels like I'm a proper pulp novelist now.
You can check out the website to find out where to buy, or you could subscribe to the excellent Kindle version which delivers a packed issue of murder and mystery every month at a bargain price. 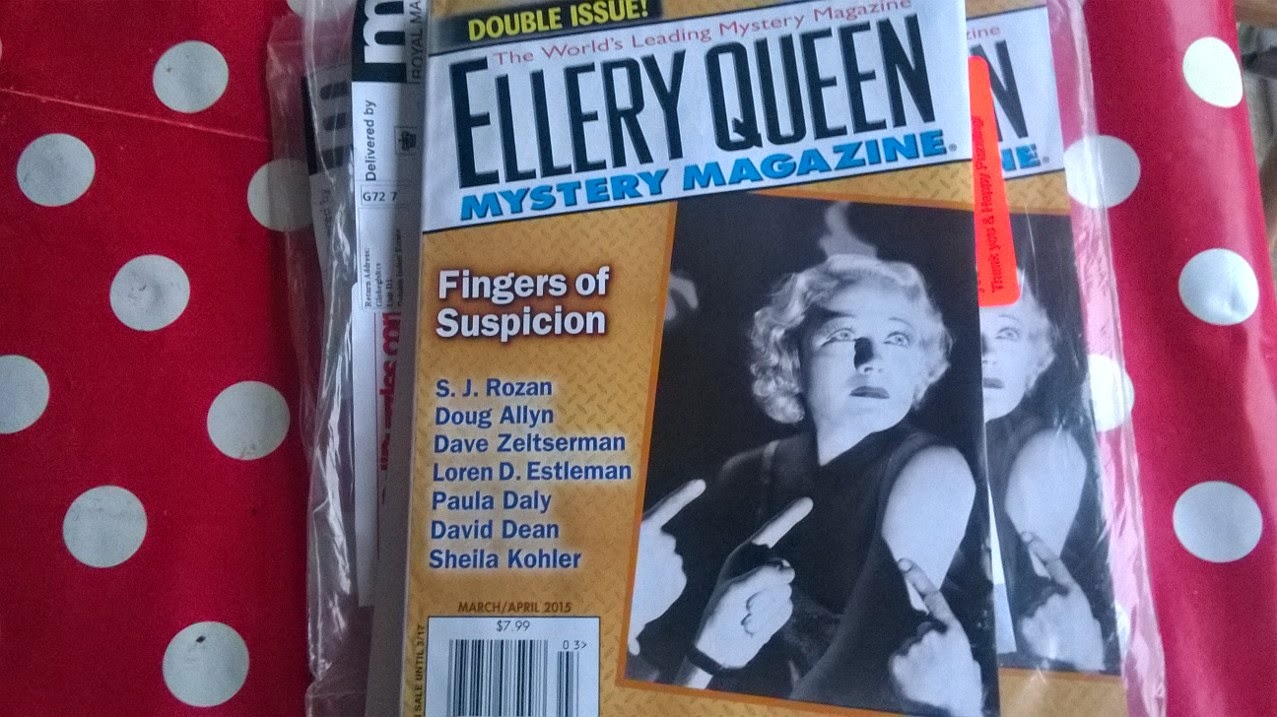 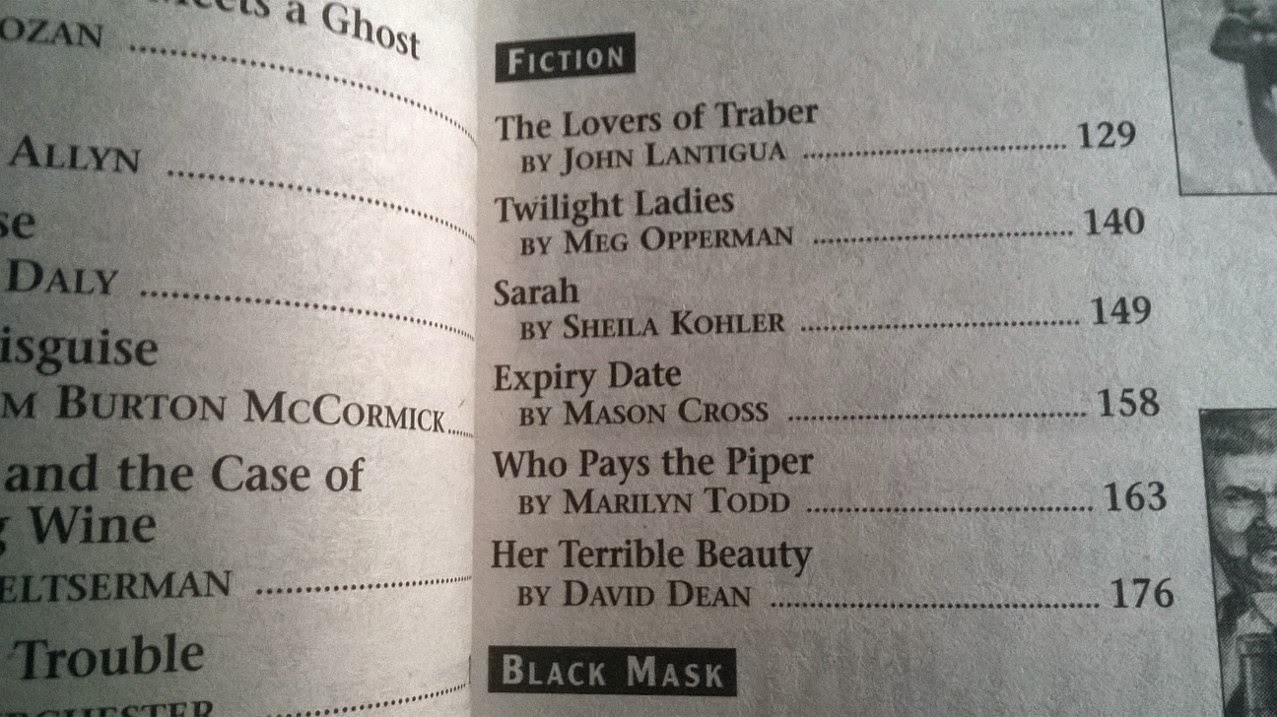 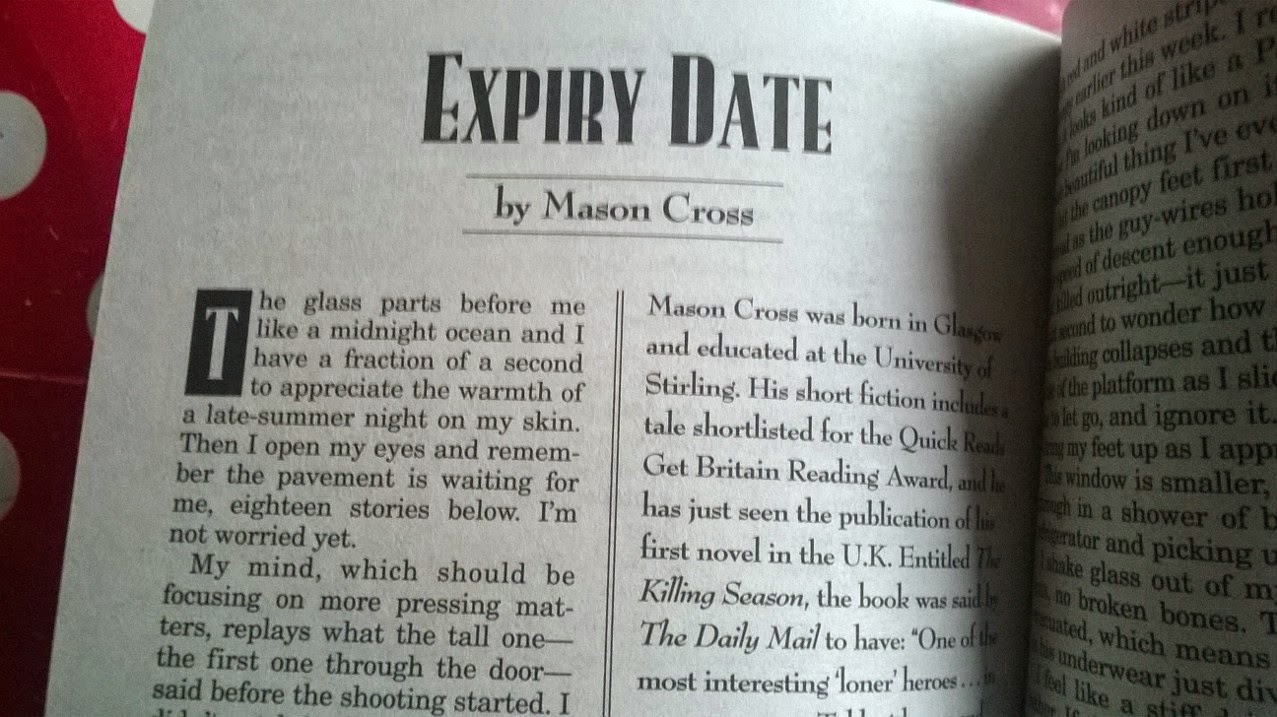 Email ThisBlogThis!Share to TwitterShare to FacebookShare to Pinterest
Labels: Ellery Queen, writing for the pulps 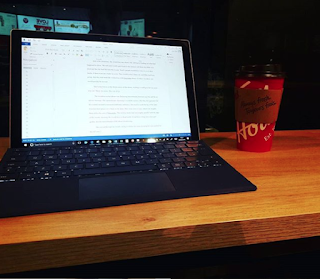 Although I still consider myself a newbie to the world of being a professional writer, I have a reasonable number of events, signings and talks under my belt already. I love doing events, because they're always unique, and you always get at least one or two questions that nobody has asked before.

I also hear some questions again and again, which I don't mind in the least because a) it's natural that there will be some aspects of being a writer that everyone is interested in, and b) answering the same question multiple times gives me a chance to really think about the answer.

One of the questions I'm consistently asked (whether at events or just when people find out I'm a writer in conversation) is, "How do you find the time to write a novel?"

I think there are two main reasons people always ask this: either they're awestruck about how anyone could sit down and write enough words to fill an entire book, or they're aspiring writers who would like to give it a go, but don't know how they can fit in the time to do all that writing. A mainstream commercial novel these days is usually somewhere between 80,000 and 120,000 words. Whichever way you cut it, that's a lot of words. I can completely understand why the size of the task intimidates people, because it intimidated the hell out of me before I gave it a try.

All writers get asked the 'How do you find the time?' question. The glib answer is "One word at a time." The answer that's closer to the truth for me is, "Five hundred words at a time."

When I first thought seriously about writing a novel, I realised that I would have to structure my time so that I could write every day (or as near as I could manage). I read a lot of advice that suggested I'd need to aim for a thousand words a day. Hell, Stephen King does at least two thousand a day, seven days a week. That freaked me out. For me, sitting down at the desk after a long day in the real world, in the knowledge that I'd have to write such a big chunk of words, would be a one-way ticket to writer's block. To cap it all, I read one moronic article online that loftily proclaimed "If you don't have time to write a thousand words a day, you don't have time to be a writer."

I can now confidently assert that the above advice is bullshit.

My turning point was talking to a friend at work and bemoaning the fact that, with a full-time day job, a part-time night job and a young family, it would be tough to find the time to write a thousand words a day.  His advice was simple: "Don't. Write five hundred words a day."

I thought about it. Five hundred seemed a little more doable. But it couldn't really be that simple, could it?

I did some calculations. Five hundred a day, say six days a week, makes 3,000 words a week. That's over 12,000 words in a month, which would be close to the word count of the longest story I'd ever written. In six months, at that pace, I'd have around 80,000 words, which is a novel. I remembered John Grisham saying he wrote his first novel at the rate of one page a day until it was done. Suddenly, the impossible task seemed almost... possible.

So I tried it out. Every night, I sat down with the intention of writing five hundred words. Most nights, I didn't stick to that. Most nights, once I got started, I wrote more than five hundred words. Sometimes a lot more. Freed from the pressure of having to meet a high word count, I relaxed and got into the daily routine. The other thing it did was get me in the habit of being able to write anywhere. If I had a half hour in a coffee shop or a train journey, it was an opportunity to get my words for the day done. If I had a laptop, great. If not, I could write longhand and type it up later. 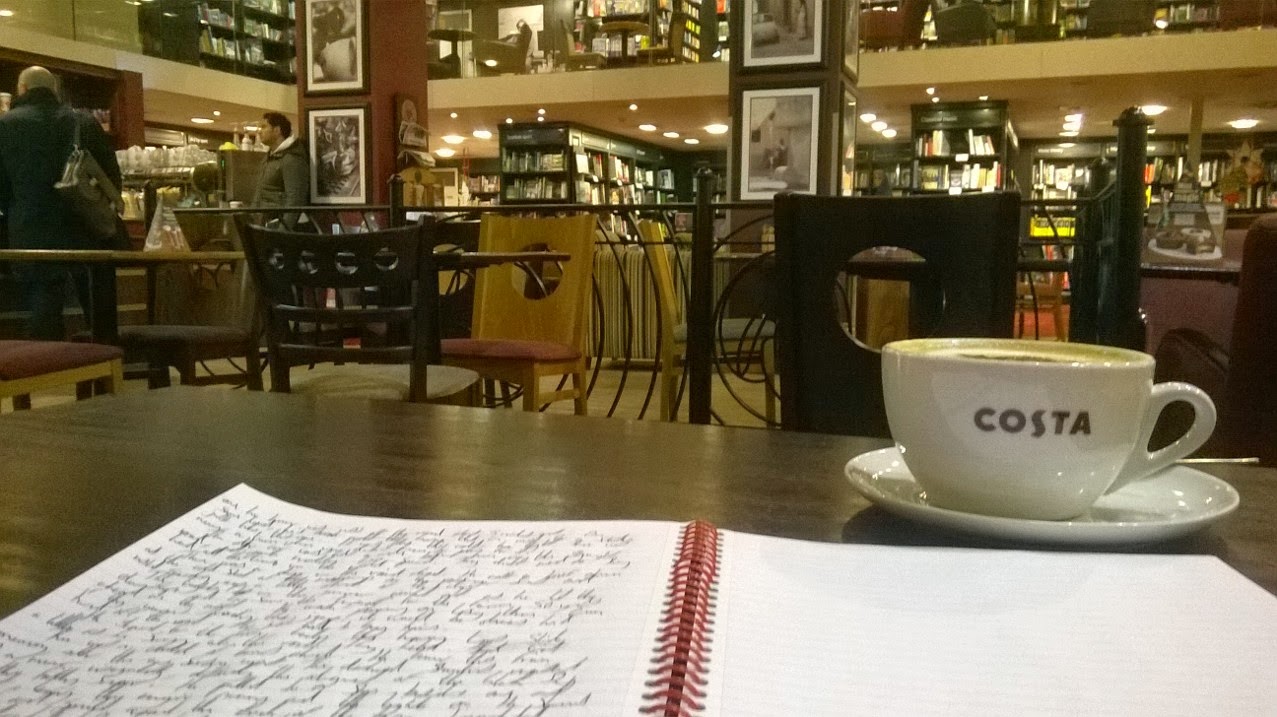 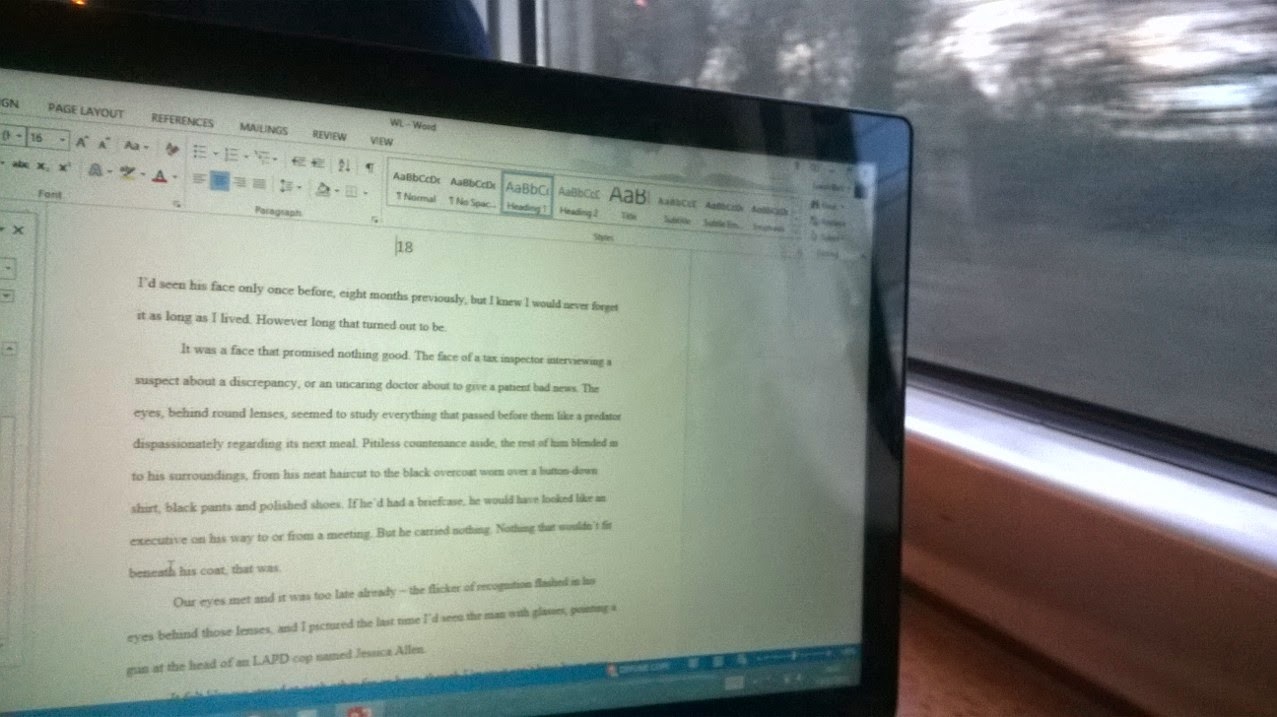 It doesn't take long to write five hundred words - when I put my mind to it, I can get five hundred words down in fifteen or twenty minutes. Even with some procrastination time and wasting a while on Facebook, Twitter or 'research' when I first sit down, I can get it all done in an hour, no problem. If you have time to walk the dog, go jogging, commit to a half-hour soap opera, you have time to write a book.

To this day, I still rely on that method. Even though I have deadlines now and I know I'll need to average quite a bit more than five hundred a day in order to hit them, I can always fool myself into getting started by promising myself I can stop at five hundred. Occasionally I do, but more often than not, I'll be walking away from the keyboard with another eight hundred, a thousand, even two thousand words in the bank.

If you're reading this and you've been trying to find the time to write a novel, stop thinking about that mountain of words you need to climb.

Just think about the next five hundred.

Email ThisBlogThis!Share to TwitterShare to FacebookShare to Pinterest
Labels: 500 words, Where I Find The Time, writing


The Killing Season makes its first foreign-language appearance this Thursday in Bulgaria, locally titled Сезонът на убийствата, which (according to Google, at least), translates as Season Murders.

I also think my name looks much cooler in Bulgarian.

You can order the book from the website of Obsidian, who are my publisher over there. In the meantime, if any Bulgarians are reading this, Надявам се, че като него! 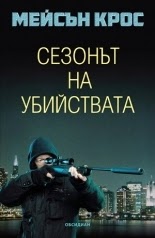