The cover of The Killing Season has now been added to the listing page on the Waterstones website, so I guess it's okay to share now.

All I can say is WOW. 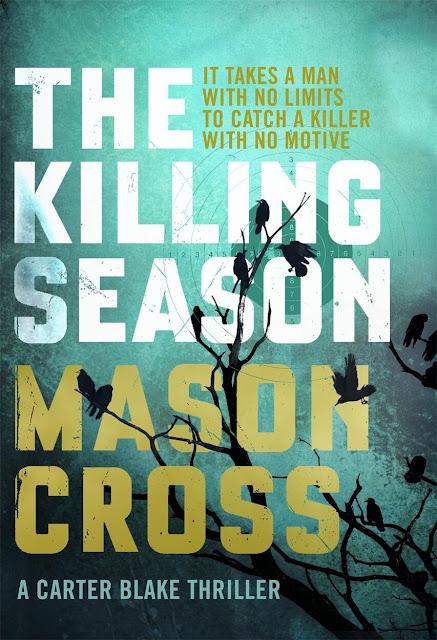 I've been hard at work on the next Blake book, but in between doing that and dealing with the mundane everyday life stuff, I've been getting regular updates on The Killing Season's journey through the various stages of production. I'm enjoying these updates - they're like little reminders every couple of weeks that this is really happening and there's going to be a real, chunky hardback book at the end of the process.

I just finished going through the unapproved copyedit and, of course, couldn't resist tweaking a few things here and there. This despite the book already having been through three major drafts, a polish, another draft following my agent's suggestions, and another draft after that once the book had been picked up by Orion and they'd made their suggestions. The one constant is that the book keeps getting better (I think) each time.

I've read this novel more times than I've read anything else I've ever done, and I'm pretty sure I could recite it by heart by now. That's why it's always good having a fresh pair of professional eyes reading something over. Somehow even on the sixth or seventh run through (or whichever this is) you can still find things to fix or improve or fiddle with. I'm starting to think that no book is ever truly finished until they print the damn thing. Of course, that's probably the very moment I'll notice some glaring typo on page 214...

The other cool thing about a real, physically published book, is the cover. I've just had a sneak preview from my editor and it was everything I hoped and more. I was cautiously optimistic, because Orion have some very nice looking products on the shelves at the moment, but suffice to say they've exceeded my expectations.

The best thing about it is it's immediately identifiable as an action thriller, and yet it isn't a picture of a guy with his back to us walking into a barren landscape holding a gun. I think it's really going to stand out on the shelves.

They're still tweaking (I guess covers are like novels in that respect), so I don't think I'm allowed to share it just yet. When they're happy with the final version, I'll post it here.
Posted by Mason Cross at 15:52 No comments: