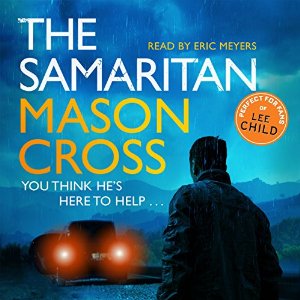 I'm giving away a copy of the audiobook of The Samaritan on CD (read by the fantastic Eric Meyers) to a lucky member of the Mason Cross Readers Club. This competition is open worldwide, and to new and existing members of the readers club.

All you have to do is sign up using the handy form below by midnight GMT on Monday 31st October (one of my favourite days of the year). The winner will be randomly selected from the list and contacted for a mailing address.

Joining the readers club is a good idea anyway - you get a heads-up when a new book is published, plus exclusives and competitions like this one. No spam guaranteed, and you can unsubscribe any time with one click. 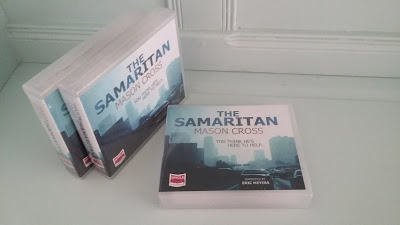 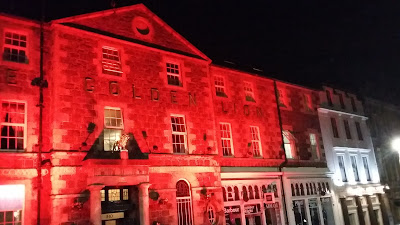 Some pics from Bloody Scotland 2016 I've been meaning to post... 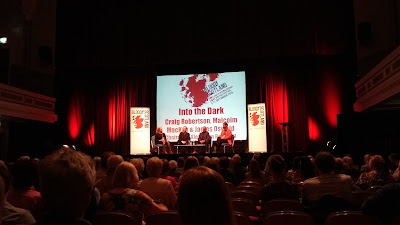 As usual, it was a great weekend, and I think this could have been the best year yet. It was nice to spend time with fellow authors, meet readers and bloggers and see some great panels.

Event highlights included Ian Rankin, Chris Brookmyre, Stuart Neville and Craig Robertson and many more. One of the best things about the weekend was finally getting to see Mark Billingham and My Darling Clementine's performance of The Other Half - a mixture of spoken word and music. As a fan of both crime and country music it was right up my street. 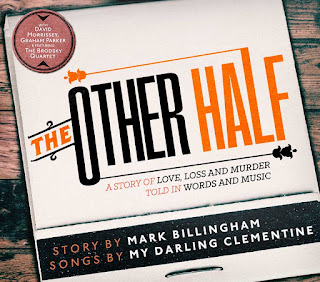 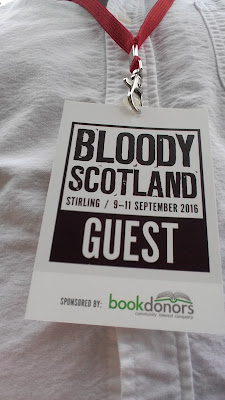 My own panel was a hell of a lot of fun. (Not) Born in the USA featured myself, Steve Cavanagh and GJ Brown being interrogated by Catriona Macpherson about being Brits who set our thrillers stateside. We covered a lot of ground, from how much of ourselves is in our characters, to the impact the presidential election could have on telling stories in the US, to the logic behind picking pseudonyms at the start of the alphabet. 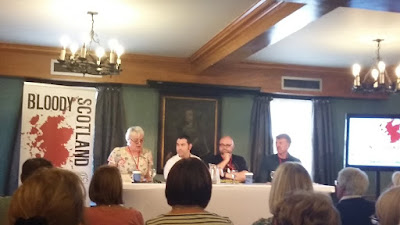 Looking forward to next year already - big thanks to the team at Bloody Scotland who make it run so smoothly.

This is a Q&A with me published on the Facebook page of my large print publisher Magna Books.

Magna published The Killing Season in large print last year, and The Samaritan is coming out on November 1st.

Mason Cross is the author of the Carter Blake thriller series, which began with The Killing Season. Recently described as a ‘bestseller in the making’, Cross’s second book, The Samaritan, was picked for the Richard and Judy Spring Book Club earlier this year. His third book in the series, The Time to Kill, came out in the summer and will be available in large print in November and in audio next April. Mason lives in Glasgow with his wife and three children and juggles his writing with a day job in IT.

1. Can you tell us about your journey to becoming a writer?
I always loved writing stories at school, and I was lucky that my parents and teachers were always really encouraging. As a kid I wrote science fiction and action stories, and some Choose Your Own Adventure style stories, which I would print out and sell at school. After university I remembered how much I loved writing anything that wasn't an essay and, inspired by Stephen King's On Writing, began writing short stories and submitting them to magazines and competitions. I piled up a heap of rejections and eventually managed to get published in a couple of places. I also uploaded some of my work to HarperCollins's Authonomy website, and was surprised when I was contacted by the top-flight agent Luigi Bonomi, who had read some of my work online. He signed me up and gave me some great advice, and a couple of years on I landed a book deal with Orion. It's scary to think how much luck is involved, but it demonstrates the importance of getting your work out there.

2. Have you always written thrillers and crime stories or did you start off with a different genre?

I've always leaned towards crime and noir, although I did write a few horror stories when I was younger. For me, mystery is an essential element of any story, and crime and thrillers seem to be the most natural structures for exploring that. That said, if I had an idea that would work for a different genre, I would certainly pursue it.

3. On an average day, how much time do you spend writing? Is it difficult to juggle writing with your day job in IT?

Most of the writers I know have a day job and/or kids, and I have both. It just means that discipline is even more important: I have to make sure I hit a certain number of words in the time I have available, which is usually night-time after my three children have gone to bed. When I'm writing I'll try to fit in some words whenever I have downtime: during lunch, on trains, whatever. It helps that I'm using a different part of my brain than I do at work, so it doesn't feel like one long working day.

4. What do you find are the best and the worst things about writing?

I love starting work on a fresh book when the possibilities are infinite and you're excited to explore a new story and characters. The worst thing is the midpoint crisis, which almost every writer I know experiences, when you can't see how you're going to finish this thing and start to doubt your abilities. I hate that part, but you just have to grit your teeth and fight through to the other side.

5. Your novels are set in the United States, have you ever lived there? How do you do the research for your books?

I've never lived in the States, but I've visited a few times and spent time in LA, San Francisco and New York. Like most people, I do a lot of research online: the internet is a fantastic resource for everything from the geography and history of a particular place to sunrise and sunset times, to the intricate details of cyber terrorism. I'm also lucky to have American friends who will read early drafts, highlight any mistakes and give me invaluable local knowledge.

6. Are you planning to write any thrillers set in Scotland?

I have a half-finished psychological thriller set in Glasgow that I keep meaning to go back to. It's different from the Carter Blake books - more influenced by Hitchcock and Ira Levin. I'd love to have the time to finish it, so I can find out how it ends.

7. Do you know how your stories are going to end before you start writing them?

Sort of. I write a reasonably full outline of about four pages. That gives me enough idea of the plot to get going, but I always make big changes along the way. The ending always comes out differently from how I had planned - I need to have written the rest of the book first to be able to work out the ending.

8. What’s the best writing advice anyone’s ever given you?

Write every day, but don't overdo it. Hearing about authors committing to writing two thousand words a day used to really put me off, until someone suggested I try to hit 500 a day. 500 words is a manageable amount: it doesn't seem too daunting, you can do it in half an hour or less, and if you do that every day, in six months you'll have the first draft of a novel. 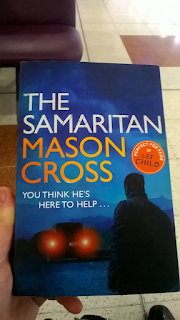 Time for another giveaway - if you'd like to win a signed copy of UK paperback edition of Richard and Judy Book Club selection The Samaritan, all you have to do is register for the giveaway on Goodreads using the handy button below.

This is open to everyone in the world - all you have to lose is a couple of clicks.

P.S. - watch this space for another giveaway soon.

This one is just going to be members of the Mason Cross Readers Club, which you can sign up for in a couple of clicks right here:

Email ThisBlogThis!Share to TwitterShare to FacebookShare to Pinterest
Labels: giveaway, Goodreads, The Samaritan 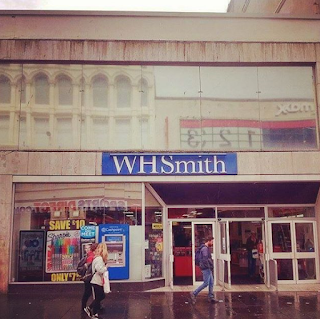 I'm pleased to announce that I'm going to be doing a mini-signing tour of WHSmith stores in central Scotland over the next couple of months. The tour is focusing on The Samaritan, because The Time to Kill isn't out in paperback until next year.

WHS has been a big supporter of me (not least through the Richard and Judy Book Club promotion), so I'm looking forward to doing my first actual book tour with them.

You can see full details of these events both on the WHSmith Events blog and my website, but here are the dates. If one of the stores is near you, come along and say hello! 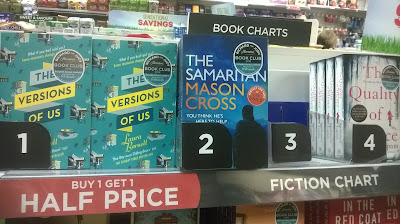 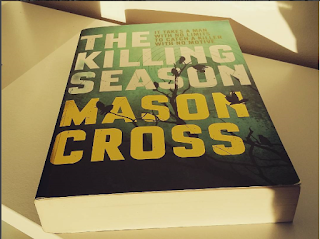 Thanks to everyone who entered the competition to win a signed first edition trade paperback copy of The Killing Season by signing up to the Mason Cross Readers Club!

The competition is now closed and the randomly selected winner is David Barr! Congratulations, David, and thanks for signing up.

If you missed out on the competition, you can still sign up to the Readers Club using the handy form below. I'll only email you when there's something interesting to say (new book coming out, competition, possibly some exclusive content in the not-too-distant-future), and you can unsubscribe at any time with one click. Go on, you know you want to...