Hot off the presses, I got to hold my first copies of The Samaritan yesterday - as with Killing Season, it's initially published in trade paperback (on the right hand side in the first pic, top in the second) and a more limited and even better-looking hardback edition (left hand side in pic 1, bottom in pic 2). 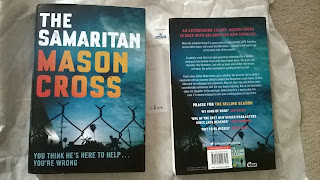 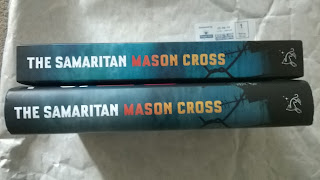 It's always nice to have a finished product at the end of the long process that starts with scribbled notes and evolves through typing the first draft, making structural and line edits, incorporating changes after expert feedback, bug-fixing and page proofs. It helps when the product looks as good as this (particularly the beautiful hardback).

I suppose this marks the moment where I officially cease to be a debut novelist, which I'm a little sad about, but it also means I'm a novelist with multiple books to his name, which of course is a good thing. Anyway, I don't think I'll ever get used to the amazing experience of opening a proper printed book and seeing a bunch of words I made up filling it from cover to cover. It's a pretty awesome feeling. 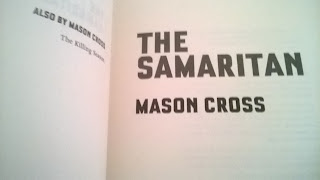 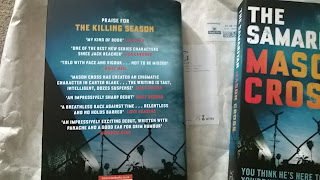 The ebook edition has been on sale for a while, but if you want a physical copy, these babies are available in the UK from all good bookshops on 16th July. And if you want one slightly earlier than that, come along to the book launch at Waterstones Glasgow (Argyle Street) at 7pm on 15 July!
Posted by Mason Cross at 09:58 No comments:

Email ThisBlogThis!Share to TwitterShare to FacebookShare to Pinterest
Labels: The Samaritan

I'm going to be appearing at the Apple Store in Buchanan Street, Glasgow, for a special meet the author event on Thursday 9 July. Look at the awesome promo graphic they made using my publicity pic: 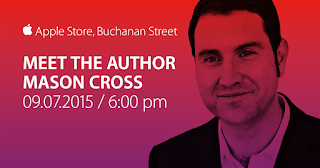 It's very 70s cop show, as they pointed out, which is of course my preferred look.

I'll be promoting The Samaritan, which is published in print the following week, but already available in ebook and audio - since this is an Apple Store gig, I'll take this opportunity to plug the iBooks version.

I'm really excited about this event, as I'll be doing some of the standard stuff, like reading, talking about my books, but also talking about how new technology and digital is affecting the publishing industry and the process of being a writer.

The event is free and you'll be able to book on the website next week, or if you have an iOS device, you can book right through the Apple Store app.

Email ThisBlogThis!Share to TwitterShare to FacebookShare to Pinterest
Labels: Apple, events, The Samaritan

This summer is shaping up to be pretty busy!

First up, I'm going to be part of BritCrime - a brand new online festival featuring 40 British crime writers. For people who are too busy or live too far away to attend literary festivals, this is a nifty idea, because as long as you can get on the internet, you can attend. The festival is going to be held over Saturday 11 - Monday 13 July on the BritCrime Facebook page, and will feature virtual author panels, giveaways, Q&As, and even a virtual pub. It's all Helen Smith's idea, and it's going to be great - check out the BritCrime website for news, offers and soon, a full programme.

Following on from the launch of The Samaritan at Waterstones Argyle Street on 15 July, I'm delighted to be being asked back to the Edinburgh International Book Festival on Friday 21 August. I'm even more delighted to be sharing the bill with Mr Steve Cavanagh - a fellow Orion dude and author of the fantastic legal thriller The Defence. Tickets are onsale from the festival website on Tuesday 23 June, and you can also vote for The Defence for the Edinburgh First Book Award.

And in September, I'm back in Stirling for Bloody Scotland, this time on a stacked panel of thriller writers featuring Simon Kernick, Tom Wood and GJ Brown. My event is on Sunday 13 September, and you can find out more and get tickets from the festival website.

That's it for now, but I have at least a couple more cool things to announce soon, so keep an eye on the events page for new updates, including something fruit-related...
Posted by Mason Cross at 11:00 No comments:

I've been uncharacteristically quiet of late thanks to general busyness and the small matter of finishing the third Carter Blake book, so it's time for a quick catch up, largely so I can take stock of what's happened and what's happening next.

I spent another great weekend in Bristol at CrimeFest, which involved two great panels: one on psychological and action thrillers with Sabine Durrant, Paul Hardisty and Rebecca Whitney moderated excellently by Stav Sherez; and one on psychopaths with James Carol, Clare Donghue, Stuart Neville and Caro Ramsay, moderated slightly more chaotically by yours truly.

It was great to finally meet fellow Orion rookie Steve Cavanagh and hang out with the usual suspects. I also got to meet Lee Child and thank him in person for the cover quote. He was very cool and gracious, saying even more nice things about the book and chatting about the new Reacher movie.

Just like last year (although with slightly less nice weather), it was a great chance to catch up with friends, meet some new ones, and drink way too much. I played it smart this year by not volunteering for Criminal Mastermind. 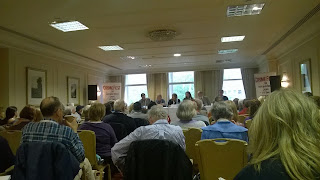 Some really great reviews of The Killing Season and The Samaritan were posted recently:

The Killing Season had a heart-stopping, thrilling ending and this was delivered again in The Samaritan and then some. Thriller fans looking for something fresh, and to feel that excitement you get upon discovering an author such as Mason Cross would be well-advised to check out this series.


[The Samaritan is] a sprawling American epic delivered with panache.
- Barry Forshaw, Independent
The thriller elements are really really well done, keeping you on the edge of your seat, there are some beautiful twists and turns, a gorgeous flow to the prose and generally speaking this is a damn good read. Definitively now one of the series I shall be following avidly and probably re-reading a lot, the Carter Blake series is one of those you can sink into, have a great time with, and re-emerge later wishing you had another 10 books featuring Carter on the shelf to read already.

The Killing Season is a very exciting novel indeed, made extra tense by the mystery surrounding both prey and hunter. We move across locations, each vividly described, meeting potential victims and suspects, tripping over red herrings, getting sidetracked by false alarms. And then there are the twists. This is a very clever novel. It’s not going to be easy for Blake.

This is without doubt one of the best debut thrillers that I've read in a long time - a fantastic page turner that left me totally hooked on Carter Blake and Mason Cross has left me wanting more. A highly addictive read and Mason Cross is certainly one to watch.

- Sam Everett, Tigerlilly Books
Book Addict Shaun also kindly interviewed me for the blog here, with some great questions, while Mario Acevedo grilled me for The Big Thrill.

I'm delighted to be at Bloody Scotland again this year, on a panel with thriller maestros Simon Kernick, Tom Wood and GJ Brown - check out the events page for more details and some other upcoming events.

I'm equally delighted to be on the bill for the first-ever BritCrime online festival. The brainchild of Helen Smith, It takes place on a Facebook near you over 11-13 July and is completely free. Find out more at the Facebook page and BritCrime.com

My editor tweeted the cover proof of The Samaritan and it looks amazing. 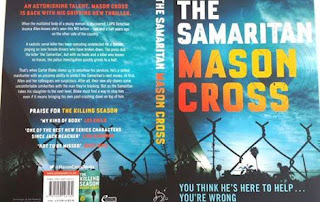 Oh, and I sent a few spare proof copies of Killing Season out to known thriller fans... and Bill Clinton sent me a nice reply. 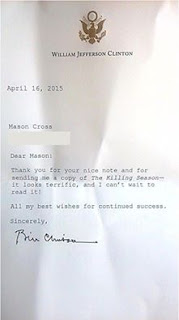