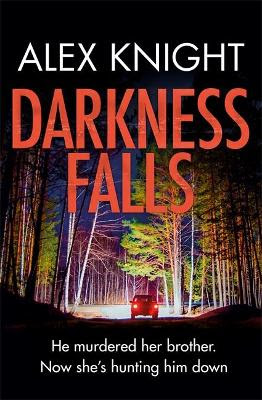 Darkness Falls is published today, the second standalone thriller under my Alex Knight pseudonym. Unfortunately, just like last year, Alex won't be getting a book launch, thanks to the pandemic, so this book will have to make its way out in the world unlaunched.

I hope it finds its way to people who will enjoy it, and I am getting to do at least one event, at Bloody Scotland this Friday.

If you want a taste of the book, you can read chapter one on the Alex Knight website, and here's the blurb...

Twenty years ago, her brother was murdered.

Thessaly Hanlon is four hours into a long drive home through the night when she pulls into a 24-hour roadside diner to take a break. She’s exhausted, but when she hears a chillingly familiar voice from the next booth, she wonders if she’ll ever sleep again.

The voice is unmistakable. It belongs to Casper Sturgis, the man who murdered Thessaly’s brother two decades before, and then disappeared without a trace.

Thessaly makes the decision to follow the killer. As she begins to unravel the second life of Casper Sturgis, she finds that digging into the past can have deadly consequences…

Hunted, my first standalone book under the Alex Knight pseudonym is out today from all good bookstores in the USA.

I had a lot of fun writing it, particularly as the research took me to one of the cities I love most, San Francisco, and beyond to explore northern California. So far, people seem to like it. 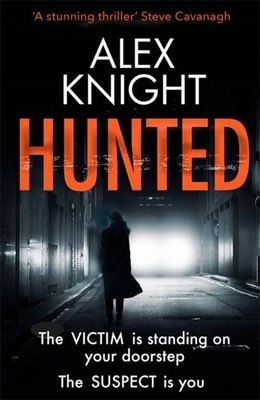 You can read chapter one on the Alex Knight website, and if you like it, you can get the book from these places:
Indiebound
Barnes & Noble
Amazon
Audible
You can also order Hunted wherever you are with free worldwide postage from Book Depository.
*
You’re woken early by banging on the door. It’s a young girl, the daughter of the love of your life. She’s scared, covered in blood, she says her mother is hurt.
You let her in, try to calm her down, tell her you’re going to get help. You reach for your phone, but it lights up with a notification before you touch it.
It’s an Amber alert, sent to all four million phones in the Bay Area – a child has been abducted by a dangerous suspect.
The child is the girl standing in front of you.
The suspect?
You.
Posted by Mason Cross at 03:24 No comments: