Today marks exactly one year since Orion signed me to a two-book deal for The Killing Season and its follow-up.

It's been a really busy year, what with carrying out edits on The Killing Season and writing the first draft of the followup, currently titled The Samaritan. As well as that, I've also been working the day job and, in what spare time remains, doing daddy duties on two girls and a baby boy (who was born the same week Killing Season was sent out on submission). So all in all, the year has gone by pretty quickly.

Book one will be published on April 24th next year, which is a mere 158 days from today, and things are already beginning to pick up speed. For example, Orion sent me through the final cover proofs, which look absolutely fantastic with the blurb and the gold lettering (I suspect I'm not alone among aspiring novelists to have always dreamed of seeing my name in embossed gold foil): 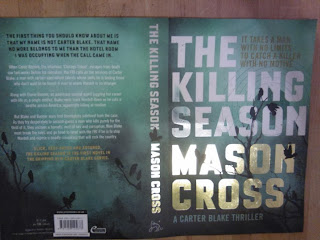 Also, I'm now appearing listed as a real-live author on the Orion and Hachette websites, complete with biography.

But one of the very best things that's happened lately is I'm starting to get endorsements from some of the established authors Orion sent my book to. Last week my editor Jemima forwarded me two fantastic quotes:


Mason Cross has created an enigmatic character in Carter Blake, a mystery man who is both cerebral and ruthless, an inexorable protagonist on the trail of an equally relentless and dangerous enemy. The writing is taut, intelligent, oozes suspense, and is an accomplished first book: The Killing Season is a highly impressive debut novel. Cross is a name to watch, and I eagerly await the next Carter Blake thriller.
- Matt Hilton

Pulse-pounding. Mason Cross launches into The Killing Season with no-holds barred, as he deftly combines an adrenaline rush plot with one of the best new series characters since Jack Reacher. Prepare to read all night .

We're definitely getting into regularly-having-to-pinch-myself territory. Just over a year ago, I was feeling pretty pleased with myself just to have a novel out on submission with major publishers. When I signed with Orion I was delighted to have been taken on by one of the best publishers in the business. Now, I'm getting fantastic feedback from some of the authors I've read and loved in the past.