Giveaway ends November 30, 2014.
See the giveaway details at Goodreads.
Enter to win
I have some spare copies of The Killing Season and thought it would be fun to try a Goodreads giveaway.

So until midnight on November 30 (I'm assuming San Francisco time, since that's where Goodreads is based), you can register to win one of three signed copies of The Killing Season in trade paperback.

Winners are selected randomly by Goodreads, full t&cs on the entry form.

Good luck!
Posted by Mason Cross at 01:27 No comments:

Quick update about my recent trip to London, where it finally dawned on me that despite visiting The Big Smoke more often than I've been to almost any other city, I've barely scratched the surface of the tourist trail. I've never been to the Houses of Parliament, or Big Ben. I've never been on the London Eye. I certainly haven't done any of the shiny new stuff, like the Shard. I didn't tick off many of those touristy things this time either, but I did do some other cool stuff. Like get on a London bus for the first time.

Even more exciting than that, though, I visited my publishers at Orion House and chatted to the sales team about The Samaritan. It was lovely to meet some members of the team I hadn't spoken to before, and to see how enthusiastic everyone is about the book. I also got a very early preview of the paperback cover of The Killing Season, which already looks great even in a rough draft. I caught up with my editor Jemima and got to meet my paperback editor Jo for the first time. I even got to meet David Young, the CEO of Orion, who said really nice things about the first two Carter Blake books.

I also got to meet some of the local booksellers, guided by expert sales rep Linda. We zipped around central London on foot, by bus, by tube and by cab  (I've definitely ticked off the full public transport package) to some independent bookshops like Goldsboro Books (who have signed hardback first editions if you're in the market) and various branches of Waterstones, including Picadilly which is the biggest bookshop in Europe, and Trafalgar Square. Little did we know we were there mere hours before the #waterstonestexan would walk in and begin his spell in captivity.
The idea was to meet some of the people who'll be selling the book, and to hand out advance copies of The Samaritan. These were hot (well, warm by the time I touched them) off the presses, and were what is called 'rough proofs'. Every day is a school day - I didn't know about this before. The rough proofs are printed up locally on much heavier paper than standard books (they weighed a ton), so we could have super-early advance copies. Even in this format, though, they looked great. The cover really pops, and I'm really glad we decided to stick with the title.
We met lots of nice booksellers, including Chris at Piccadilly and Rowan at Trafalgar Square, and gave them advance copies. 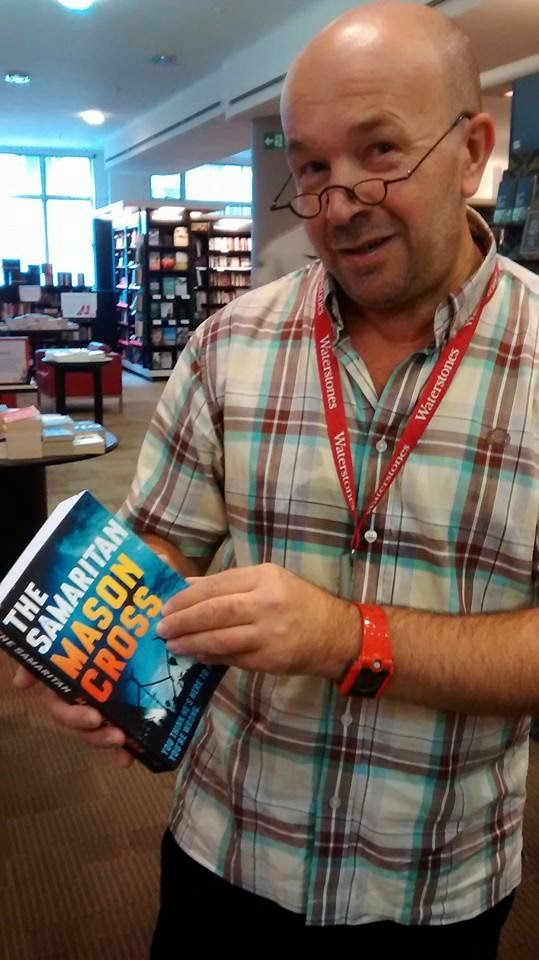 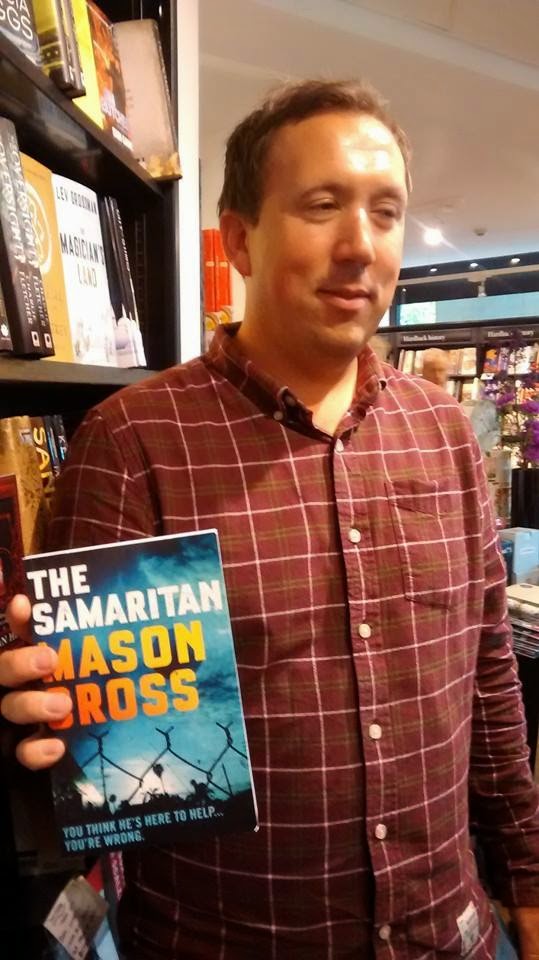 I can't wait to see what the team comes up with for the proper advance proof, after the excellent ARCs for The Killing Season. After all that, I had a short window before my train home, so I managed to squeeze in some very basic sight-seeing: 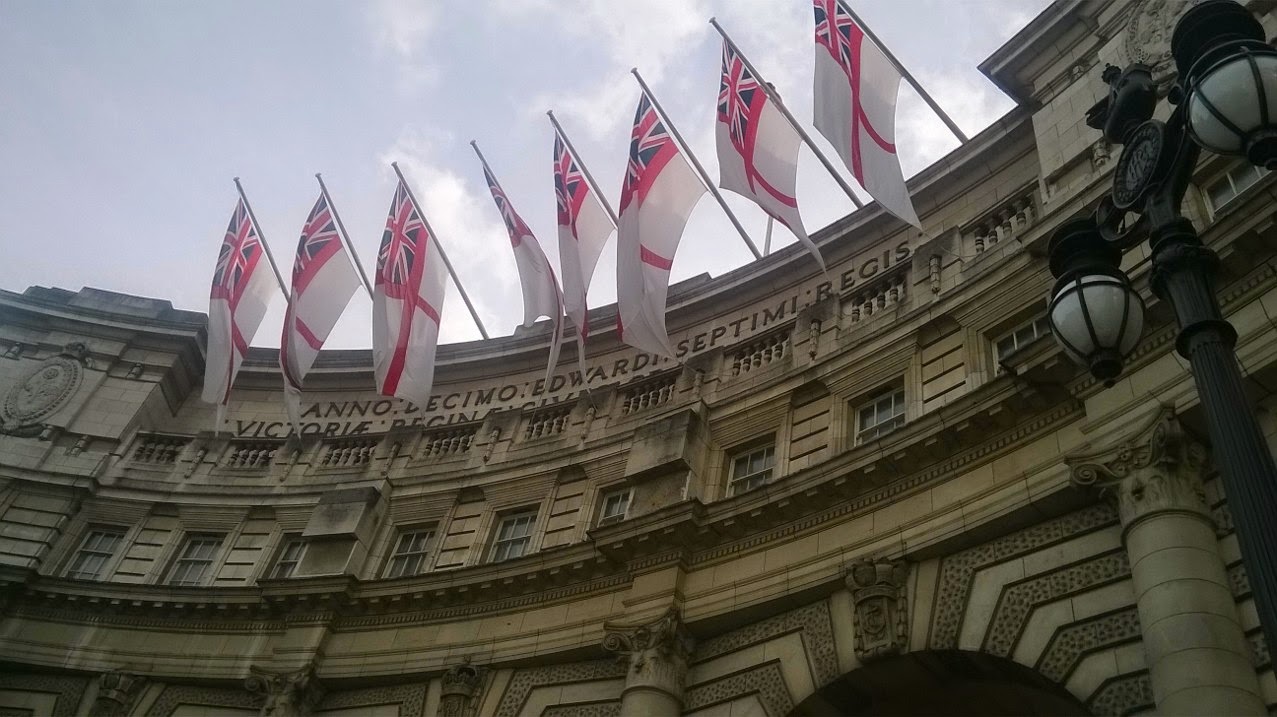 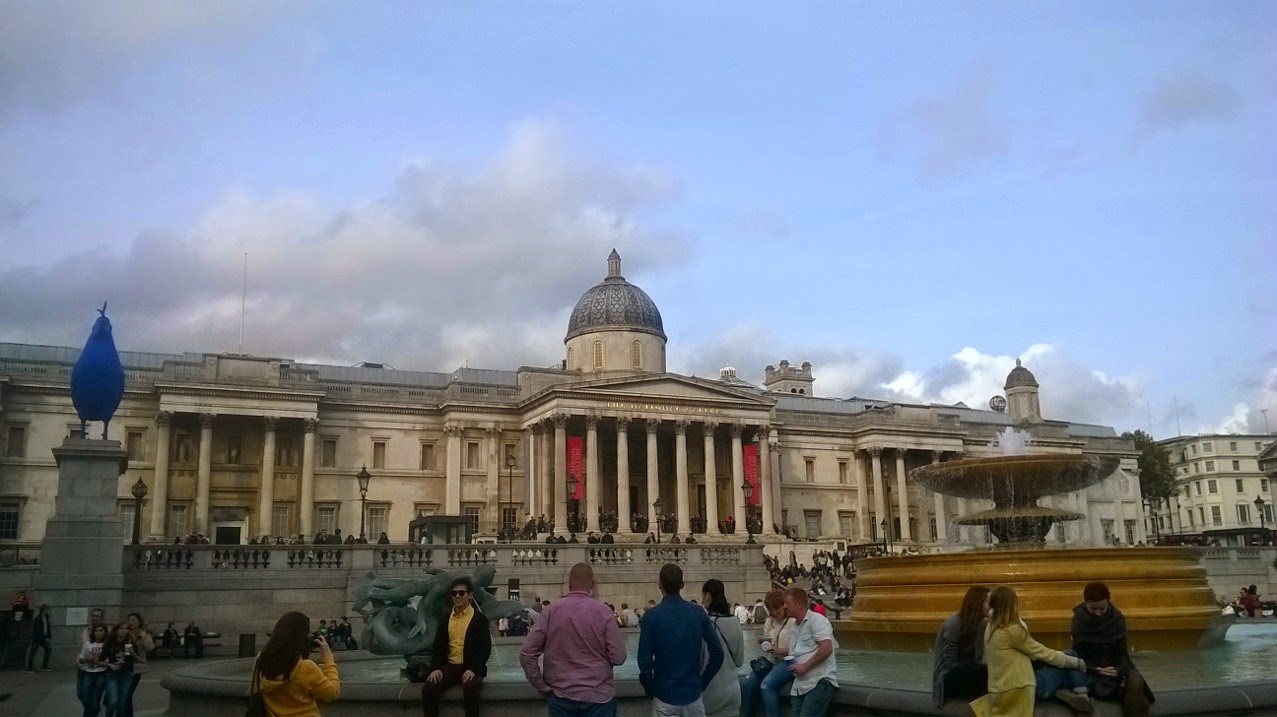 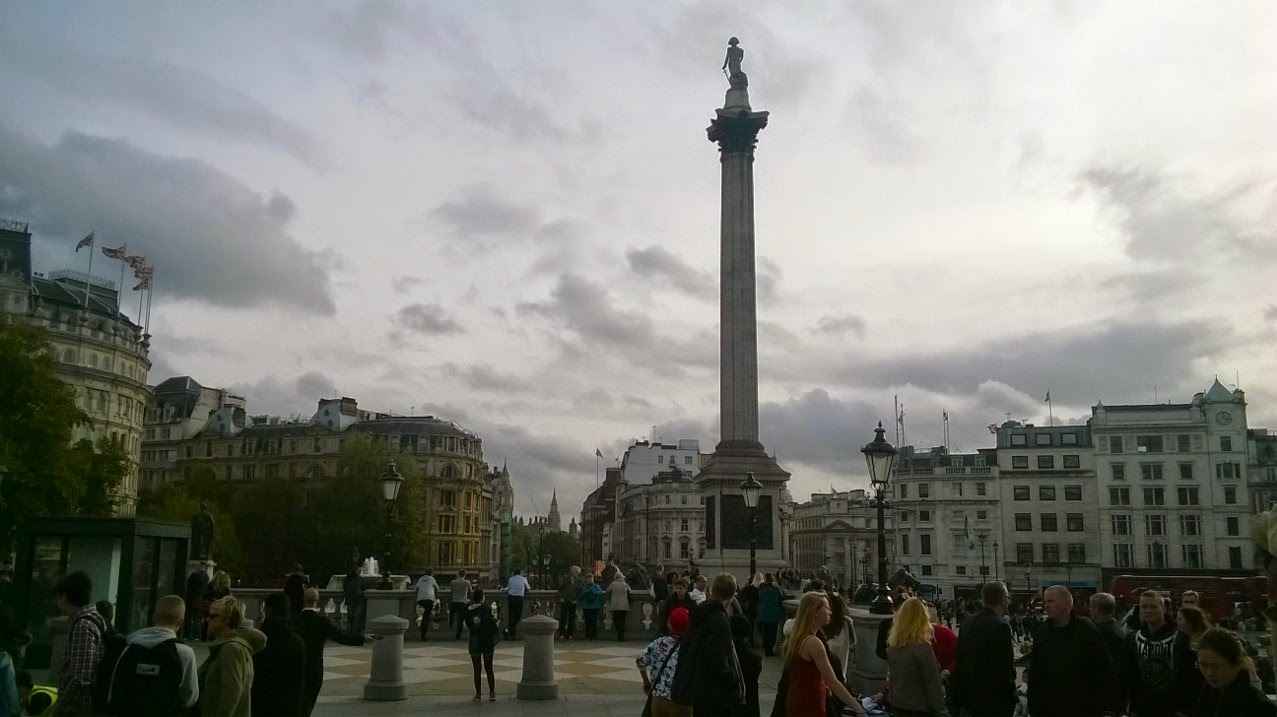 ...as well as a lightning-quick stop at Five Guys, naturally...
...before it was time to head homewards. After trying out the plane and the hell that is the overnight bus in my younger days, I always take the train now. Door to door, it takes the same time as flying and there's a lot less waiting around / being frisked. It also gives you time to work on new projects.

Of which I hope to tell you more very soon...

Interview - There's Been a Murder

Lynsey Adams has very kindly made me Up and Coming Crime Author of the Month over at her excellent There's Been a Murder blog.

There's an interview with me and lots of other cool stuff for lovers of noir. The Saul Bass-influenced font is cool too. Go check it out!
Posted by Mason Cross at 10:06 No comments: Having attended Bloody Scotland as a member of the crime-reading public this time last year, I was delighted to be invited to be part of an author panel this time around.

The weekend got off to a well-lubricated start with a drinks reception hosted by Stirling Council at the old town hospital. After that, we headed down the hill (Stirling is big on hills) to see the opening event: Chris Brookmyre and Denise Mina, who had a lively and free-flowing conversation onstage about everything from their latest work to the referendum that had taken place the previous day. Ah yes, the referendum - after the frenzied debate of the past few weeks, it was nice to spend the weekend in a bubble where people were more interested in talking about books and where to go for the next drink.

Saturday dawned and I managed to finish the second of my co-panelist's books before my event at lunchtime. After being briefly delayed by a quartet of Elvises dressed as janitors... 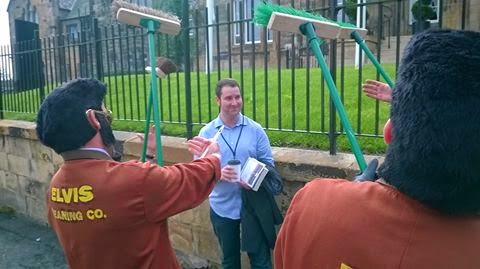 ...(did I really just type that sentence?) I found myself sharing a stage with two other debut authors: Eva Dolan (Long Way Home) and Hania Allen (Jack in the Box). Although I think we suffered a little from being scheduled opposite the Scottish vs English crime writers football match (Scotland won convincingly), we had a pretty good-sized crowd. 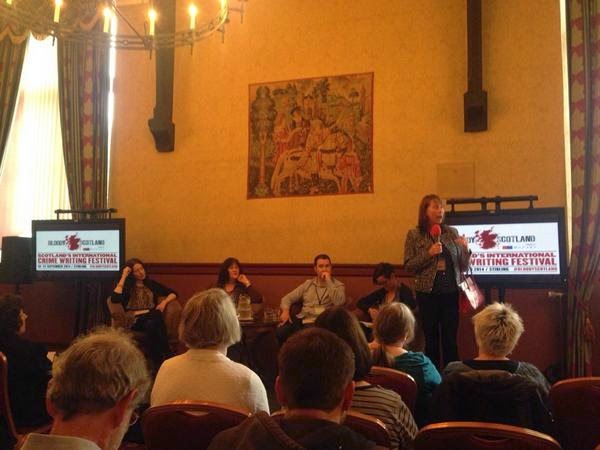 We discussed a wide range of topics, from why women read more crime fiction than men, to how we come up with the characters, to how we got published. It was really interesting that the three of us had followed quite similar routes: failing to find a publisher for our first novels, experimenting with self-pubbing through Amazon, and eventually getting a deal with a traditional publisher. It could be a giant coincidence, or perhaps this is the way it happens in the 21st century. Either way: a great advertisement for not giving up at the first hurdle.

With my panel out of the way, I headed down to The Murder Room - Orion Crime's popup presence alongside Waterstones in Stirling's Albert Halls. It was great to see POD paperbacks of some of the classic noir titles Orion has been bringing back as eBooks (everything from Geoffrey Household's Rogue Male to Robert Bloch's Psycho) and to be inveigled into being photographed in a really crap John D Macdonald related pun. On the other hand, they also had gorgeous samplers of The Samaritan, alongside the new Denise Mina and Anthony Horowitz books (it was awesome being mentioned in the same breath and on the same banner as these bestsellers). 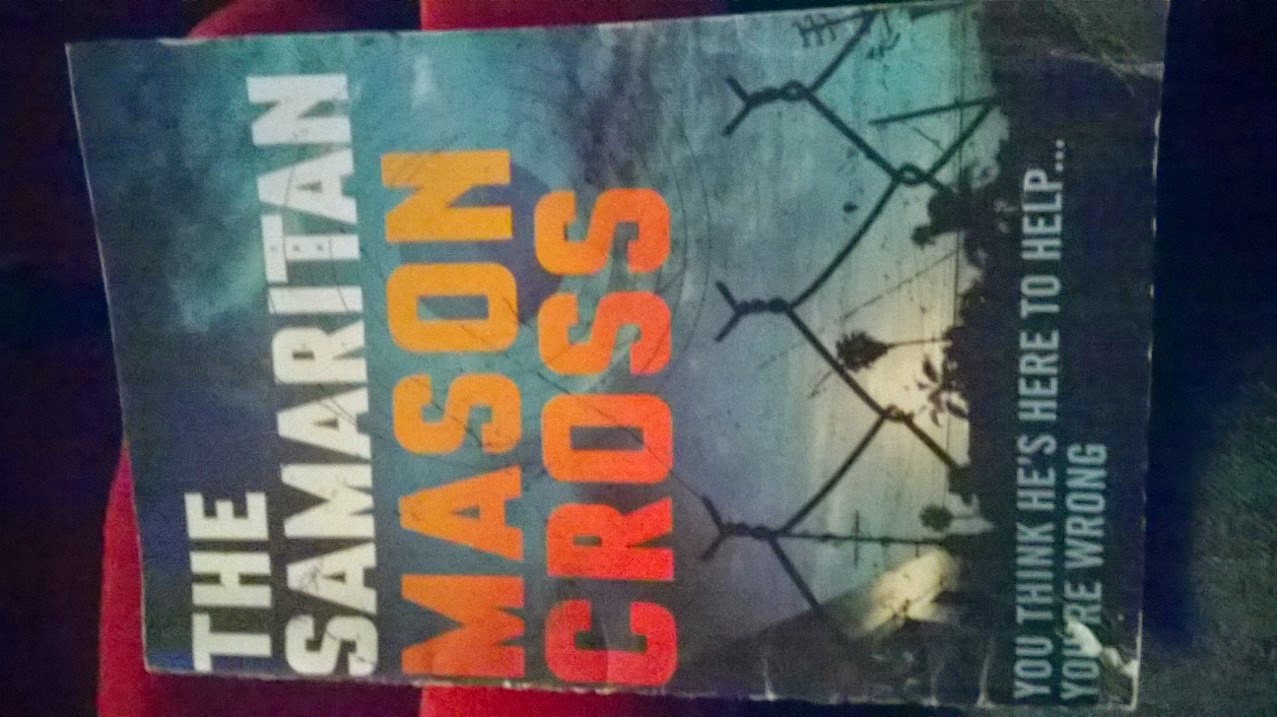 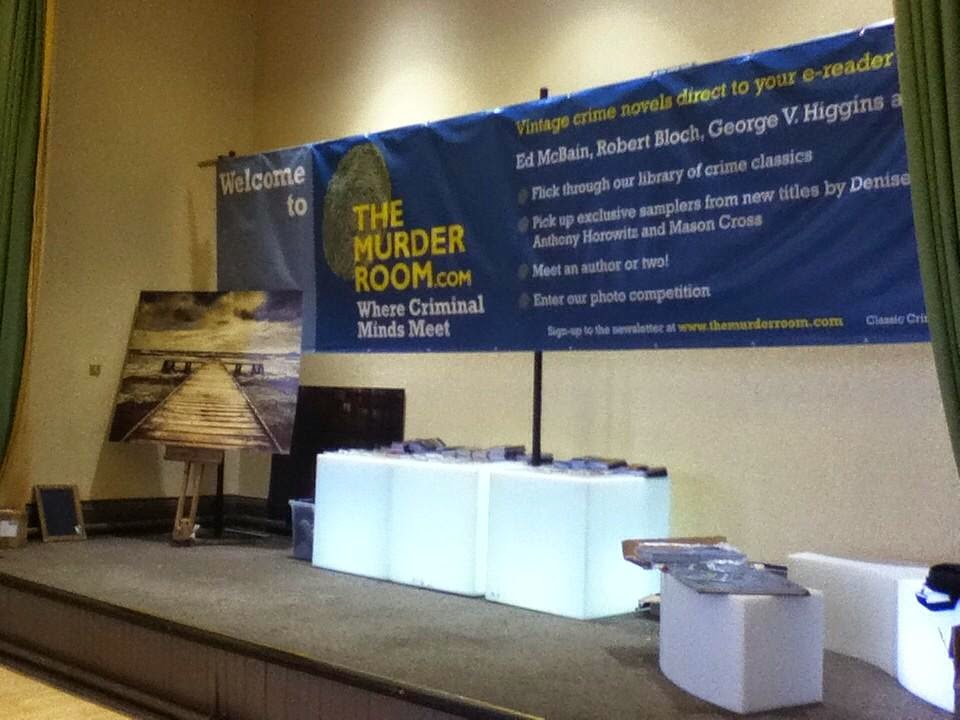 I stuck around for the big Saturday evening event: Ian Rankin interviewing Kathy Reichs, and as a big fan of both, it was great to hear them talk shop for an hour. I particularly liked hearing about the different approaches they had to TV adaptations of their work, with Reichs exec-producing and consulting on Bones and Rankin having taken a more hands-off (to date, at least) approach to Rebus.

After dinner at a pretty good Italian place, I headed to the bar in the Highland Hotel and had some interesting conversations, including one where a few of us came up for a pitch for a romantic cat detective mystery. Late night chats in the bar are one of my favourite things about book festivals, although I think I might leave it to others to execute that particular idea.

After signing some copies of Killing Season at the Stirling branch of Waterstones, Sunday at Bloody Scotland got going with some multi-hyphenates: journo-turned-author Craig Robertson interviewing actor-turned-author John Gordon Sinclair and footballer-turned-author Arild Stavrum. I was particularly inspired by JGS's example of building a writing shed at the bottom of the garden, complete with electricity, a burglar alarm and a beer fridge. 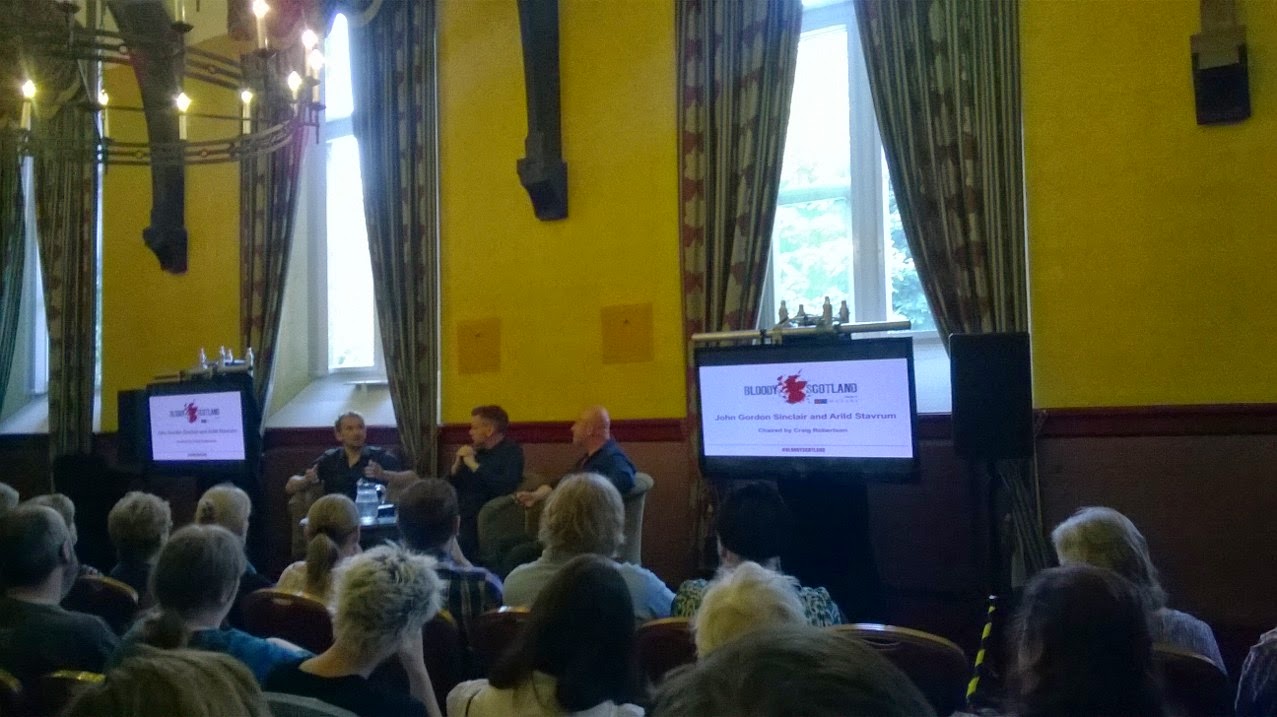 After that, I saw Alexandra Sokoloff, Gordon Brown and James Oswald discussing the supernatural in crime novels, and a rumination about the nature of evil. I rounded the weekend off with Ian Rankin, solo this time, speaking about his career to date, his year off, and his next book.

In a competitive field, I'd have to say Bloody Scotland was narrowly my favourite festival next year. Looking forward to hitting the circuit next year with a new book.
Posted by Mason Cross at 09:43 No comments: