While carrying out an intensive review of my web presence (okay, procrastinating), I noticed that some of the links to older articles and interviews have become broken. I'm going to start reposting old material here so it doesn't disappear into internet oblivion.

This was from the sadly-defunct Book Addict Shaun page - Q&A first, and his generous review of my second novel The Samaritan below. 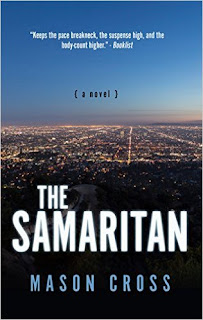 1. Can you introduce Carter Blake for those readers who are yet to meet him?

Carter Blake is a free agent who specialises in finding people who don't want to be found. He has a shadowy background in intelligence and special operations which has furnished him with the skills and experience to make him the best at what he does. As we read more about him, we start to get a bit more detail about his past.

2. The Carter Blake series is set in the US. Why do you think so many UK authors choose to set their thrillers outside of the UK?

Good question, and I think there are a few reasons. One of the most important for me was the fact that I've always loved American books and films, and it's always a good idea to write the kind of thing that you enjoy. I also think there is an advantage for UK authors writing about America because we share a language and many of the same cultural touchstones, but we bring an outsider's perspective as well. That's a good thing for writing any fiction, but particularly crime.


3. How much research did you do before writing The Killing Season and The Samaritan? What struck me is how authentic they felt in terms of their setting...

Thank you! I do some general research before I start writing, but only enough to get me started. A lot of the real detail is added as I write and in subsequent drafts. I find it easier to come up with the characters and the big scenes and then try to ground them in reality as far as possible. In some ways that was easier for The Samaritan because it's mostly set in Los Angeles and I've spent some time there.

4. Was it a lot of pressure having to follow up a successful first novel? What was it like getting a quote from Lee Child?

I was actually really lucky with timings on that, because The Samaritan was finished before Killing Season was published. It felt like I had the warm glow of having done my homework ahead of time. It was a different sort of pressure for the second book, because on the one hand I had a deadline and the expectations of my publisher, but on the other I had the confidence of knowing
that they liked the first book, so I had clearly done something right.

The Lee Child quote was a fantastic boost, as he's one of my literary heroes. I got the chance to say hi to him at Crimefest this weekend, and he was really approachable and encouraging about the book.


5. Without going into too much detail we often learn a lot about Carter Blake's past, in The Samaritan especially, is he a character that you have fully plotted out or do you yourself learn more about him as you write?

I have a pretty good idea of his background and where he's going, but I definitely do learn more about him as I write. I think it's more fun that way, because I get to find out more about him and flesh out his character and history over several books. Without giving anything away, you find out more about his past in The Samaritan, and even more in the third book, but there
are still things about him I don't know yet. Like his real name...


6. What does a typical writing day look like for you?

I tend to write at night time. I have a day job and young children, so a typical day tends to mean putting the kids to bed and then typing away until midnight or so. Right now I'm editing the third book, so basically every spare moment is taken up with that.


7. This series is one of the most exciting new thriller series I have read in recent years. Can you reveal anything about the future of Carter Blake? Can we assume this is hopefully going to be a long-running series?

Thank you, that's really encouraging to hear! The big thing in his immediate future is that his past is about to come back to bite him in book 3. The ramifications of what happens in that book will spill over into the next one. I certainly hope it will be a long-running series, and I have ideas for another few Blake books after the fourth one. The great thing about the character is he can go anywhere and get involved in a lot of different types of adventures.


8. Having worked incredibly hard to become a published author, what have you found to be the most exciting thing about the whole process?

It probably won't come as a big surprise, but the single most exciting thing has to be walking into a bookshop and seeing a real book on the shelves with words inside that you wrote. I'm really glad that physical book retailing is surviving so far in the 21st century, because while seeing your book listed on Amazon is nice, it's not the same thing. In general I feel incredibly lucky to have such a great agent and publisher, and to be so supported in what I'm doing. 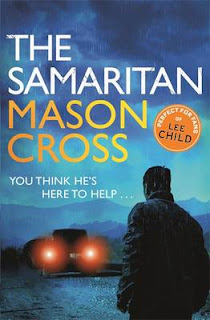 The Killing Season - the debut novel from Mason Cross - was a great success and certainly one of the more enjoyable books that I have read this year. I was incredibly relieved to have a review copy of The Samaritan to read rather than having to wait after the thrilling conclusion delivered by Mason in The Killing Season. Mason proves in The Samaritan that the comparisons to the various bestselling authors are not just marketing tools, he has created a character in Carter Blake that can easily stand alongside the likes of Jack Reacher.

In The Samaritan the mutilated body of a young woman discovered in the Santa Monica Mountains points LAPD detective Jessica Allen in the direction of a serial killer - the MO being the same as one she witnessed a couple of years ago on the other side of the country. 'The Samaritan' preys on lone female drivers who have broken down, and with no leads or traces left behind, the police are stumped. Enter Carter Blake, a skilled manhunter with an ability to foresee the Samaritan's next moves but a man who leaves Jessica and her colleagues with a couple of suspicions. Blake has his work cut out attempting to stop the Samaritan, and might just find his life once again on the line not least because he also recognises the MO as that of a man from his past.

The opening establishes to the reader just the kind of person Carter Blake is, as well as giving a little bit of background and insight as to what his 'job' is. What I especially enjoy is how refreshing he is as a character, making this series one of the most exciting new thriller series I have read for a long time. In The Samaritan Mason Cross tells the story in the present day, but interweaves Blake's past to add to the overall mystery and the story here is incredibly strong. If someone asked you to describe what you expect from a thriller I'm sure most people would list: fast-paced, relentless, action-packed etc and whilst it is a bit of a cliche to describe books in that way, that is exactly what is delivered in The Samaritan.

What struck me first in The Killing Season and again in The Samaritan is how truly American these books feel. Being written by a British author, you hope that they can bring to the story that authenticity, and Mason Cross definitely does. Add in some brilliantly vivid descriptions both of the setting and the scenes themselves and this is an incredibly exciting read. In terms of plot it is once again difficult to talk further than the blurb, but what I most enjoyed was learning more about Blake's history, and the way that it was used throughout the story. I actually thought I had a couple of the twists worked out, but I have to admit I failed to see a couple of killer twists that were revealed right before the conclusion. The Killing Season had a heart-stopping, thrilling ending and this was delivered again in The Samaritan and then some.

Thriller fans looking for something fresh, and to feel that excitement you get upon discovering an author such as Mason Cross would be well-advised to check out this series.


The Samaritan is available in paperback, ebook and audio now.

Email ThisBlogThis!Share to TwitterShare to FacebookShare to Pinterest
Labels: interviews, The Killing Season, The Samaritan