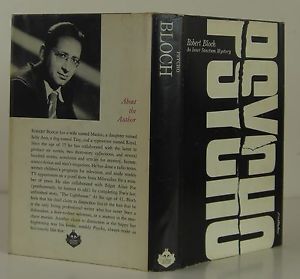 I wrote about Alfred Hitchcock's Psycho for The Murder Room last year, so it was nice to be asked to contribute another piece this year about the source material: Robert Bloch's original novel.

Some other writers were asked to pitch in with articles to coincide with Orion bringing the novel out as a UK ebook for the first time, and if you're a fan of Norman Bates, you should really over head to The Murder Room to see what the likes of RJ Ellory, Steve Cavanagh and Barry Forshaw have to say about it. Before you rush over there, you can read my contribution right here.

Being a perverse sort, I tend to do things in completely the wrong order.

For example, I actually watched Psycho 2 before I saw the original, on late-night TV some time past my bedtime in the early 1990s. It wasn’t until a couple of years later that I finally saw Alfred Hitchcock’s classic original, which blew me away and still rewards repeat viewings to this day. It’s one of my absolute favourite films, and a masterclass in the art of the cinematic thriller.

Two decades on, I belatedly got around to reading the book that started the whole thing. As a voracious reader of thrillers, it seems strange that I’ve left it until now to read Robert Bloch’s Psycho, but in my defence it’s been hard to get hold of until recently.

It was difficult to know what to expect from the novel. Often, you’re judging how a movie holds up to the book from which it was adapted. In this case, it’s very much the other way around. The basic story is pretty much exactly the one that Hitch filmed: a bored secretary steals forty grand to start a new life, goes on the lam and is murdered in the shower of the Bates Motel. Her fiancé and sister investigate, only to discover more than they bargained for.

Following an expanded opening that helps us get to know Marion Crane a little better than her literary counterpart, the film sticks very closely to its source. The fact that it was made within a couple of years of the book’s publication probably made that more feasible – nothing needed to be updated or modernised. While it’s easy to see the added value Hitchcock brought to the visuals, there’s a pleasant surprise in the way the book makes use of the advantages of its own medium, giving us much more insight into Norman Bates’s inner life. It ends up complementing the movie very well, showing us the same events from a different point of view.

Reading Bloch’s Psycho gave me a new appreciation for how much his story and Hitchcock’s film have influenced me as a writer. When I’m plotting a novel, I tend to come up with the big scenes first: the sudden outbursts of violence and dramatic reversals that will, I hope, hook the reader. When I’m writing, I’m always imagining the visuals: how a particular shot will be framed, the expression on a character’s face as they deliver a line of dialogue. Psycho, on both page and screen, is a textbook thriller: it sucks the audience in and then mercilessly pulls the rug out from under them. I’m always looking for a way to wrong-foot the reader in my books, although it’s unlikely I’ll ever come up with a twist that rivals the secret of Norman Bates.

This isn’t the first time I’ve read the book that inspired a classic movie, and often I’ve been underwhelmed by the source material: Peter Benchley’s Jaws is a case in point. The fantastic thing about Psycho is that even if you’ve seen the movie a dozen times, the book still delivers its own unique thrills.
Posted by Mason Cross at 07:04