This time last year, I set myself a small challenge. The goal was to write a minimum of 100 words a day on a side project, other than my main book, every single day of the year. 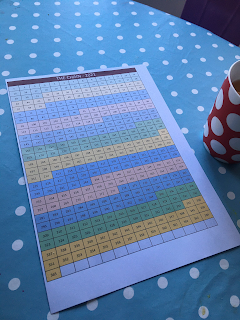 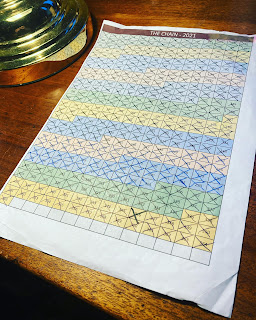 I did it. As you can probably guess, otherwise I wouldn't be blogging about it.
And most of the time, it wasn't too difficult to fit in. 100 words can literally be done in a couple of minutes. You can do it while waiting for a train, or in the queue at the chip shop.
I wrote my minimum daily 100 in lots of different places, and under lots of different conditions. I tapped it out on my phone, trying not to wake the kids at 11:45pm in our cabin on a Disney Cruise. I typed on my laptop and wrote longhand in notebooks. I wrote in pubs and coffee shops and on trains. I got 100 words a day down in hotel rooms at the Harrogate and Bloody Scotland festivals. I stuck to at least 100 a day through a (thankfully mild) bout with Covid. I even got 100 down on the nightmarish day we moved house. I wrote every day: weekdays and weekends, birthdays, Christmas, Halloween, today.
Most days, I wrote more than the bare minimum. In fact, the average word count was 198 words. I only aimed for 100, and found that I had exceeded the total almost every day.

I worked on two projects over the course of the year. I finished the draft of one book (starring a certain recurring character), and started another one (a standalone). I wrote 50,066 words on the former, from January to late September, and 22,207 words on the latter, from late September to today, giving a total of 72,273 words.

That's not a bad total for a year. In fact, it's close to a full book's worth of words.

But this was just a side project, so it's 72,273 extra words that wouldn't have existed otherwise. I still wrote a full draft of a book as well as that.

Are they good words? Some of them are pretty good, some are total shit: such is the way of first drafts. But I now have a big chunk of words to work with, and hopefully, in 2022, I can develop one or both projects into books people might want to read.

It's just before 6pm where I am, and 2021 is almost over. Wherever you are, I hope you have an amazing new year and read (and/or write) some good books.

Email ThisBlogThis!Share to TwitterShare to FacebookShare to Pinterest
Labels: 100 words a day, writing