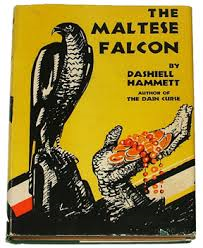 The climax is an emotional gut punch for Spade and the reader alike. You close the book realising that you never really knew the man in whose company you’ve spent the previous two hundred pages. And you realise why The Maltese Falcon has endured as a classic of crime fiction.
Posted by Mason Cross at 01:30