"If you put your mind to it, you can accomplish anything."

Like a lot of kids of my generation, Back to the Future was a cultural touchstone for me growing up. It's one of the all-time great family movies, and I suppose that's because there's basically nothing not to like: Michael J Fox and Christopher Lloyd are excellent, the supporting cast is perfect, the soundtrack is better than any combination of Huey Lewis and 50s rock has any right to be. But it's also had a huge impact me on a writer in a couple of interesting ways.
As I got older and rewatched the film, I started to appreciate how genuinely great Bob Gale and Robert Zemeckis's script is on a technical level. It's obviously strong on all the important things: ideas, action, pace, dialogue and everything else, but where it really comes into its own is in its flawless structure. There are no continuity slips, inconsistencies, or characters acting stupidly in order to advance the plot. Everything seems to happen naturally and the events abide by a clear internal logic. Considering it's a teen time travel comedy set across two periods thirty years apart, this is a remarkable achievement.
As a writer, you realise that kind of perfection can only be attempted by rewriting obsessively and really pushing yourself to make sure the story makes sense and contains a bare minimum of goofs. A lot of the time I'll be watching an otherwise great movie or TV show and some element that doesn't seem quite thought-through will spoil it a little bit. And you know that's because too many cooks spoiled the broth, or they ran out of time to tweak things, or they just got lazy. Back to the Future is the opposite of lazy. It has been an inspiration for me to try to make my work as polished and consistent as I can.
The other thing that had a big impact on me is the scene near the end where, thanks to some meddling in the timestream, Marty McFly's father George has realised his previously-unfulfilled ambition of becoming a published author. 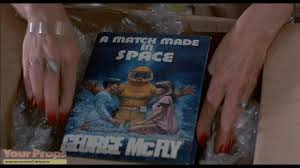 I first saw this film on video a couple of years after it was released, when I was around eight years old. Even back then, I knew I wanted to be a writer, and the idea of one day opening a box to find a stack of hardcover books that I had actually written really resonated with me.


Well, it came in a padded envelope, not a box, but today's mail brought with it my very own George McFly moment.

Yep, this experience feels every bit as cool as it looked when it happened to George McFly.

Thinking about it now, maybe Back to the Future had one more influence on me, even if just subconsciously. A recurring theme of the movie is summed up by Doc Brown's motto that "if you put your mind to it, you can accomplish anything." Marty quotes it to his father in 1955, and George quotes it back at him in the improved version of 1985. While it's perhaps not literally true (as anyone who's attempted to make a time machine out of a DeLorean can probably confirm), it's not a bad way to approach life.

Don't get me wrong, a lot of what has happened to me is down to luck, and plenty of better writers than me haven't been so lucky, but I know I wouldn't have made it to this point without deciding one day to put my mind to it. And no matter what happens next, this point is a pretty groovy place to be.
Posted by Mason Cross at 07:53

Email ThisBlogThis!Share to TwitterShare to FacebookShare to Pinterest
Labels: Back to the Future, cover, inspiration, my George McFly moment, The Killing Season, writing