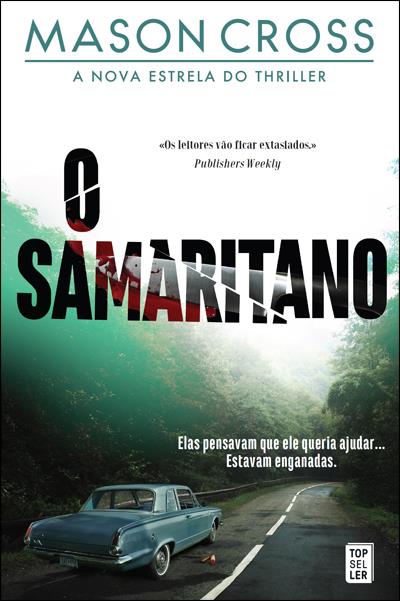 This is the Portuguese translation of The Samaritan, published by Editora 20/20's imprint Topseller. I loved their Killing Season cover (scroll down to see it) and this one is just as good.

As always, the blurb is below, followed by Google's stab at translating into English. Portuguese readers can buy a copy here.

After a stormy night in Los Angeles, Detective Jessica Allen is called to where there was a landslide. The reason? A gruesome discovery: the body of a young man was found whose neck was beheaded with an unusual cut. On the same day, they are discovered near that place two mutilated bodies in a similar way. The detective discovers that it is the work of a killer who has been operating for over ten years, without ever being caught. It is known as the "Samaritan" and capture disadvantaged young people, whose cars avariaram, leaving the charts and on the road alone. It is then that Carter Blake appears to offer its services to this police investigation. Secrecy around their true intentions leads the detective to distrust him. But when the Samaritan continues with a murder climbing, the two must come together to stop him once and for all ...

Born in Glasgow, Scotland, in 1979. He graduated in Languages ​​and has a graduate degree in Information Technology, which allowed him to find that you have much more success with words than with computers.  The Hunter is his debut novel, Carter Blake series. The 2nd volume, The Samaritan - that Topseller also publish - was selected for the Richard and Judy Book Club, a seal of quality. 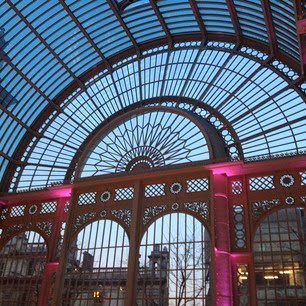 As it's summer, it's a good time to repost some articles and lists I've done elsewhere on The Internets.

Our first delivery of eco-conscious recycled material this year comes from Foyles, who asked me earlier this year for my top 10 locations in which to set a thriller. It was good timing as I had just finished edits on The Time to Kill, which sprawls across two different time periods, three countries and about half a dozen US states.

Here's what I came up with:

Think of some of the standout scenes in classic thriller fiction and movies. The sweeping Scottish Highlands in The Thirty-Nine Steps. The murky lawless zone of the off-shore casino in Farewell, My Lovely. The mountain-top base in the Alps in On Her Majesty’s Secret Service. The towering glass and steel Nakatomi Plaza in Die Hard.

A twisting plot and compelling characters are important, but an evocative location can effortlessly add drama to any scene. With that in mind, here are ten of my picks for great thriller backdrops.

So that's my personal favourite thriller settings, at the time of writing at least. What are yours? 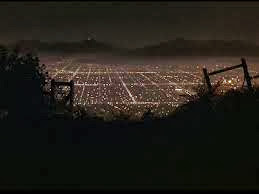 Email ThisBlogThis!Share to TwitterShare to FacebookShare to Pinterest
Labels: lists, The Time to Kill, Winterlong, writing 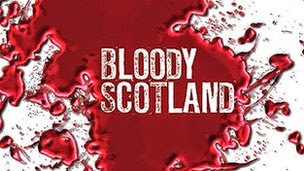 It's not long now until the gore-drenched staple of the literary year that is Bloody Scotland - my event is on Sunday 11 September and I'm appearing with Steve Cavanagh and GJ Brown on a fake Americans panel, which should be a lot of fun. Book tickets here, and you can win signed books from all of us by retweeting this link:

Follow & RT this tweet to win signed copies of latest from @MasonCrossBooks @GoJaBrown & @SSCav ahead of their event https://t.co/OBO4lfljGn
— Bloody Scotland (@BloodyScotland) August 17, 2016


I'm pleased to say I'm back at the fantastic Encounters Festival this year on 26 October at Coatbridge Library. Find out more about how to get your free tickets on the festival website, and check out lots of other great author events including fellow crime peeps Marnie Riches, Matt Bendoris, Sophie Hannah, Martina Cole, Theresa Talbot and Tim Weaver.

Speaking of library events, I've updated my Live Literature page over at Scottish Book Trust. If you live in Scotland, your library can book me to come and talk through this excellent scheme, so let them know about it if you would like me to visit a library near you.

As always, check the Events page on my website for new dates.

You still have until Sunday to win a signed copy of The Killing Season - all you have to do to be in with a chance is sign up to the Mason Cross Readers Club: 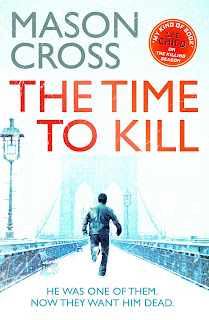 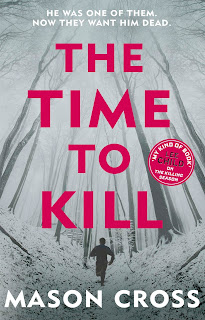 The Time to Kill seems to be doing pretty well, and I suddenly seem to have a big backlog of lovely reviews to link to. See below for a taste, click through to read the full reviews:

An action adventure (and a chase story) across the USA which kept me gripped as I read. A five star thrill-fest.

Adventures in Crime Fiction Land was lukewarm about The Samaritan but finds The Time to Kill more to his liking:

The Time to Kill is a roller coaster ride of tension, a great read that touches on geo-political issues and the war on terrorism while delivering a darn good yarn. On the basis of this and book 1 (book 2 just not being my cup of tea, though as I say, there was nothing wrong with the writing) Mason Cross is certainly somebody who's writing I will watch out for.

Meanwhile, The Crime Warp comes up with a brand new suggestion of who could play Carter Blake in the movie:

Action packed and sensitive - a James Bond type book for the 2000's (Maybe if Idris Elba doesn't get the 007 role he could play Carter Blake?- just saying).

Going down under, Readings picks The Time to Kill for its best new crime reads in August:

I really love picking up a special-ops-type thriller like Cross’s The Time to Kill – they’re always so supremely satisfying. Someone’s usually died in a dramatic, sneaky fashion by the end of the prologue, there’s usually travel to all kinds of international countries (or at least their bars/hotel rooms/abandoned warehouses), the main character knows how to handle themselves, someone gets their comeuppance, people slam phones down in anger – you get it, and you love it too.

If you've come across either of his first two thrillers, you will know this writer is a keeper. If not, put him on your list.

Also in the Antipodes, the radio station Newstalk ZB's resident book reviewer gives Blake's latest adventure a big thumbs up. Fans of Kiwi accents like myself will want to listen to the link in full:

The story starts to really race and it's very cleverly constructed with a dual narrative ... people that like Lee Child and Jack Reacher would probably really enjoy this.

The Morning Star calls it "a superior example of the chase thriller" and goes on to say:

[Blake's] former employers are coming after him, the truce he made with them when he left no longer in force. But they trained him well and he’s not going to be easy to kill. There’s all the set-piece action you could hope for.

If those reviews make you want to read more, the novel is available from all good bookshops - go here to buy in your chosen format. If you enjoy it, taking a moment to write an Amazon or Goodreads reviews is a big help.

That's all for now... see you in Stirling?

Competition - win a signed first edition of The Killing Season 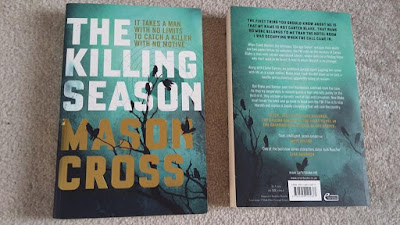 Want to win a signed first edition of the UK trade paperback version of The Killing Season?

It's the first novel in the Carter Blake series. Blake has to stop a lethal sniper rampaging across the Midwest. People who have said nice things about the book include Lee Child, Lisa Gardner and even one William Jefferson Clinton.

All you have to do to win a copy is sign up to my mailing list between today and midnight UK time (7pm EDT) on Sunday 28 August 2016.

It couldn't be easier - submit your name and email address below, then click on the confirmation email and you're on the list.

I only send an update when I have something interesting to report (like a new book coming out) so you don't have to worry about being bombarded with spam. That conjures up an interesting image, doesn't it?

The lucky winner will be selected at random and contacted by email to let them know they've won and to get a mailing address.

The competition is open to anyone, anywhere in the world.

I'll sign it (and personalise it if you want) and post it to you, wherever you may be. 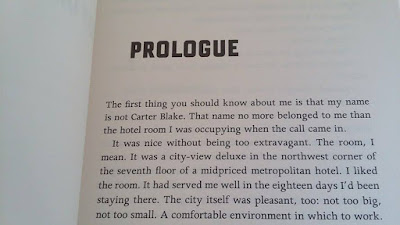 De Samaritaan is out in the Netherlands today from Luithingh-Sijthoff - go here to buy! For editions in other languages, check out my website.

Blurb as follows in Dutch, Google translate effort below that:

The Mason Cross Samaritan is the second book about Manhunter Carter Blake.  For readers of Lee Childs series about Jack Reacher.

A sadistic serial killer preys on women traveling alone with car trouble.  The press him 'Samaritan' baptized, but without evidence and traces is the police investigation quickly to a halt.

Dan Carter Blake comes into the picture, which has the dark ability to predict the next steps of the Samaritan.  FBI agent Jessica Allen and her colleagues, however, are suspicious, because their new ally has suspicious similarities with the man they are looking for ...

"Until imaginative characters, exciting plot, sleek style and fast pace.  What does a man want more?"  Quite Netherlands Detective and Thriller Guide

"A very exciting thriller full of suspense, adventure, corruption, collusion and a touch of romance."  The Telegraph
Posted by Mason Cross at 00:01 No comments: