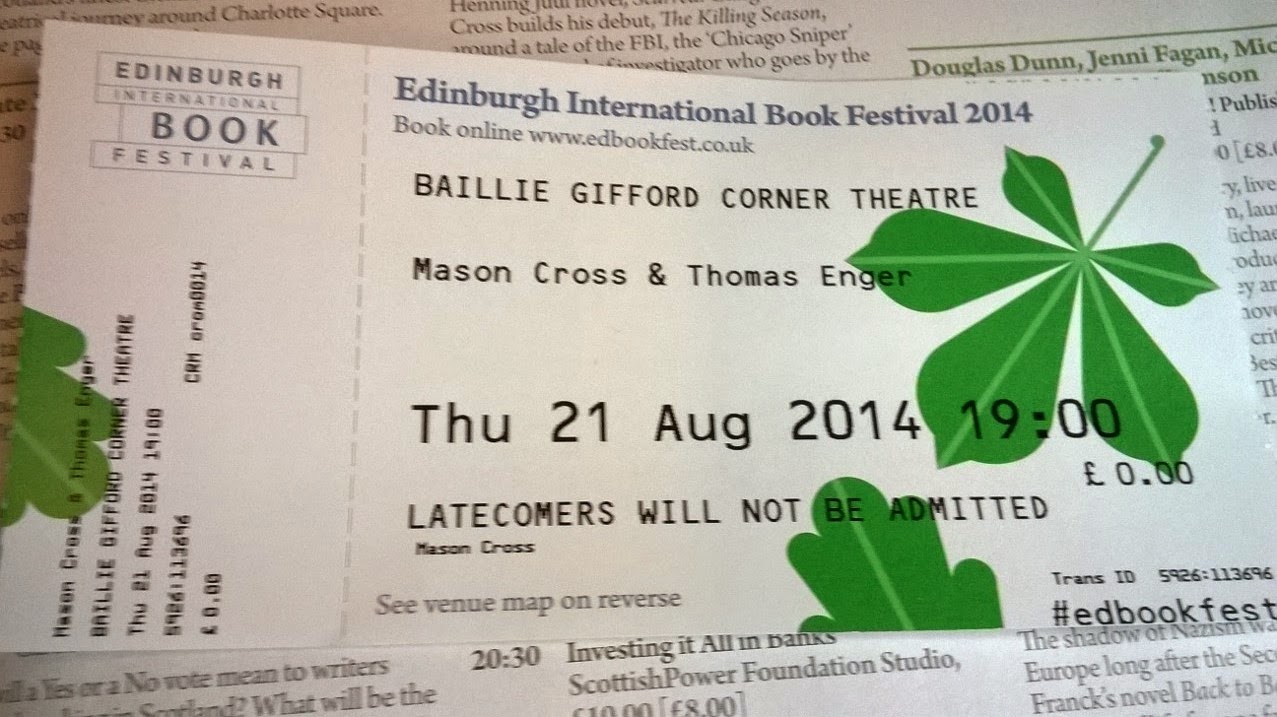 Last Thursday saw my first (and hopefully not only) engagement at the Edinburgh International Book Festival, where I was appearing with the Norwegian author Thomas Enger at an event titled Crime Fiction With a Twist.

Although I’m still very much a newbie author, I had a few events under my belt going in: a couple of appearances at Waterstones, CrimeFest in Bristol, and a few smaller talks to book clubs. Despite this, I was getting a little nervous as the date approached and I started to realise just how much of a big deal the Edinburgh Book Festival is. 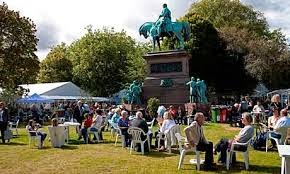 By some estimates, it’s the world’s largest literary festival, with over 900 authors attending over two and a bit weeks. There’s certainly an impressive and truly international roster, from George RR Martin to JK Rowling. So it was with a mixture of excitement and trepidation that I entered the festival on the evening of my event and checked in at the author’s yurt.

A word about the yurt: it is the coolest VIP area I’ve ever seen (in my admittedly limited experience of such rarefied environments). It’s a network of interconnecting Bedouin-style tents lined with vivid carpets and soft furnishings on which to sprawl and read a book or tap away on your laptop. There’s a wood-burning stove. There’s free food, wine and whisky. There’s relatively famous people wandering about. Most mystifyingly of all, there’s no bouncer kicking me out for being an intruder. 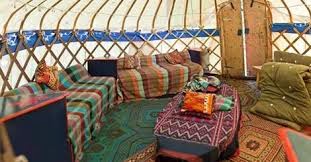 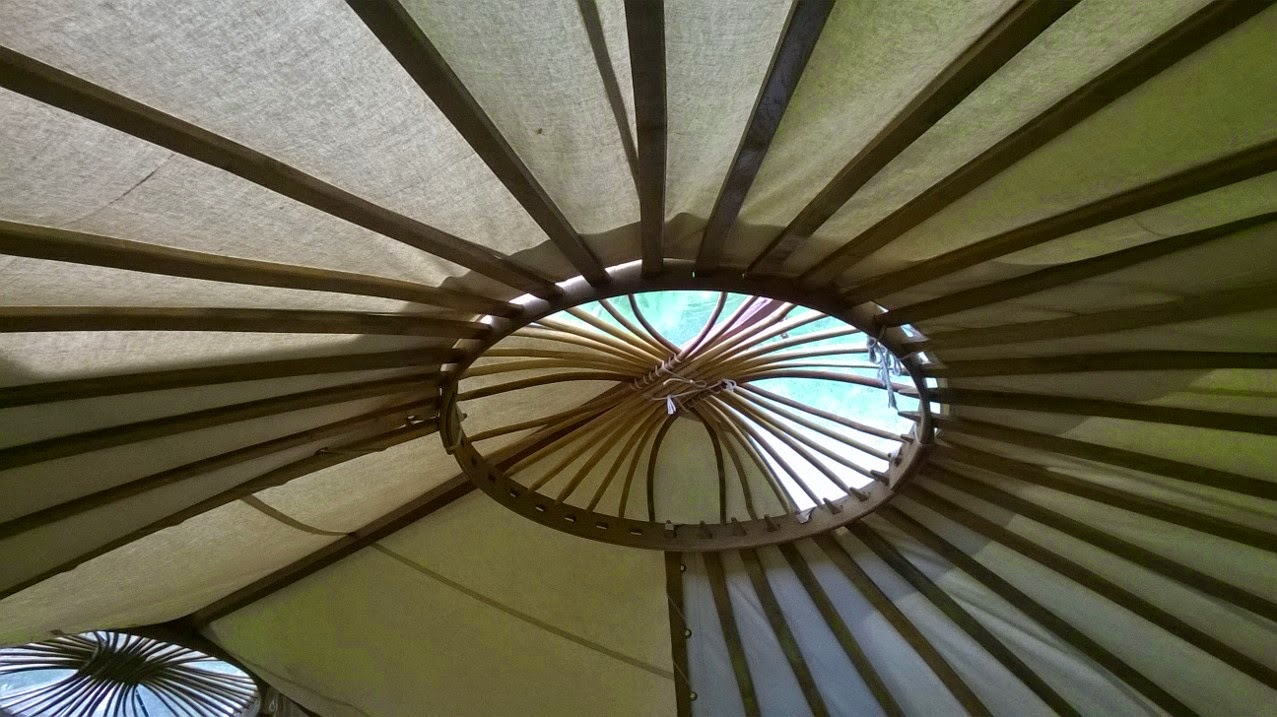 I’d infiltrated the yurt a few days before in the company of fellow criminal masterminds Douglas Skelton and Mark Leggatt following the Crime Writers Association lunch, so I’d managed to get over the impostor syndrome a little bit by the time I visited again. I met up with the event moderator, the Scotsman’s Susan Mansfield, and we had a chat about the event format and in what order everything would happen. We were briefly interrupted while I was taken for a photocall. Which actually was a photocall. One word: bizarre. I had to stand looking moody and interesting while half a dozen shutterbugs snapped me from every conceivable angle, politely yelling for me to look at their lens. It felt like an elaborate joke.

Mildly shaken by the experience of momentarily becoming a Kardashian, I returned to the yurt to find Thomas Enger had arrived along with his editor at Faber. I’d read Thomas’s latest book, Scarred, earlier in the week and liked it a lot. I’m looking forward to checking out the earlier books in his Henning Juul series. We were introduced, had a quick chat, and flipped a coin to see who would have to read from their book first. I won, so Thomas was on first.

A couple of minutes before 7pm, one of the event people materialised to fit us up with mics, and we were led to the Baillie Gifford Corner Theatre promptly at the start time. Did I mention Edinburgh operates like a very polite, incredibly friendly totalitarian regime? It makes clockwork itself look slow and inefficient.

Susan introduced us and, as per the coin-toss, Thomas went first. About three seconds after he started speaking, I realised I’d made a big mistake by going last, because I was going to have to follow him. His opening gambit was to tell the audience about his lead character, conjuring up the nightmare scenario of flames and death that begins Juul’s journey in the books. Once the room was holding its collective breath waiting for what came next, he read an early passage from his latest book.

My turn. Gulp. I knew I couldn’t match the drama of Thomas’s opening address, so I picked one of the most notorious scenes from The Killing Season to read: a short sequence from Elaine Banner’s point of view that ends with a somewhat grisly punchline.

Susan introduced both of us with some very nice praise and then kicked off the questions by asking us about our respective protagonists and our experiences of writing the books. The two novels are of quite different styles, so she did a great job of coming up with interesting topics that were applicable to both of us. There was an interesting discussion about political subtexts. Neither of us set out to make political points in our books, but both of us agreed that the subject matter does a lot to dictate the underlying themes.

The audience questions were great too. So far I’ve been very lucky with every single event I’ve done in that there’s never been an awkward silence before the first question. This time proved no different, with people chipping in immediately with questions for Thomas, for me and for both of us.

One of the questions that seems to come up a lot (and did again here) is about plotting. People always seem to be interested in whether you plan everything in advance or make it up as you go along. The answer for me (and I’d guess the majority of writers, if they’re honest) is “a bit of both”. I need to have a pretty good idea of what’s going to happen in a book before I start, but I know I’ll change a lot in the process of writing the book itself. In particular, my endings tend to develop a lot once I have the weight of a book behind me. Good material for a blog post sometime soon, now I think of it…

By the way, nobody in attendance seemed to know what the twist in 'Crime Fiction With a Twist' was, so perhaps that in itself was the twist - eat your heart out, M Night Shyamalan.

The event flew by, and before I knew it, it was time to wind up and head over to the festival bookshop for a signing. It was great to meet some members of the audience, some of whom had read the book already and kindly said they were going cast their vote for me in the festival First Book Award [yeah – that is a shameless enticement for you to do likewise, if you would be so good].

After that, it was yurt time again for some post-event unwinding. I caught up with some friends, chatted to Lin Anderson fresh from her Society of Authors event, and probably drank a little too much of the complimentary whisky.

All in all, a very cool first festival experience. Next up: Bloody Scotland.