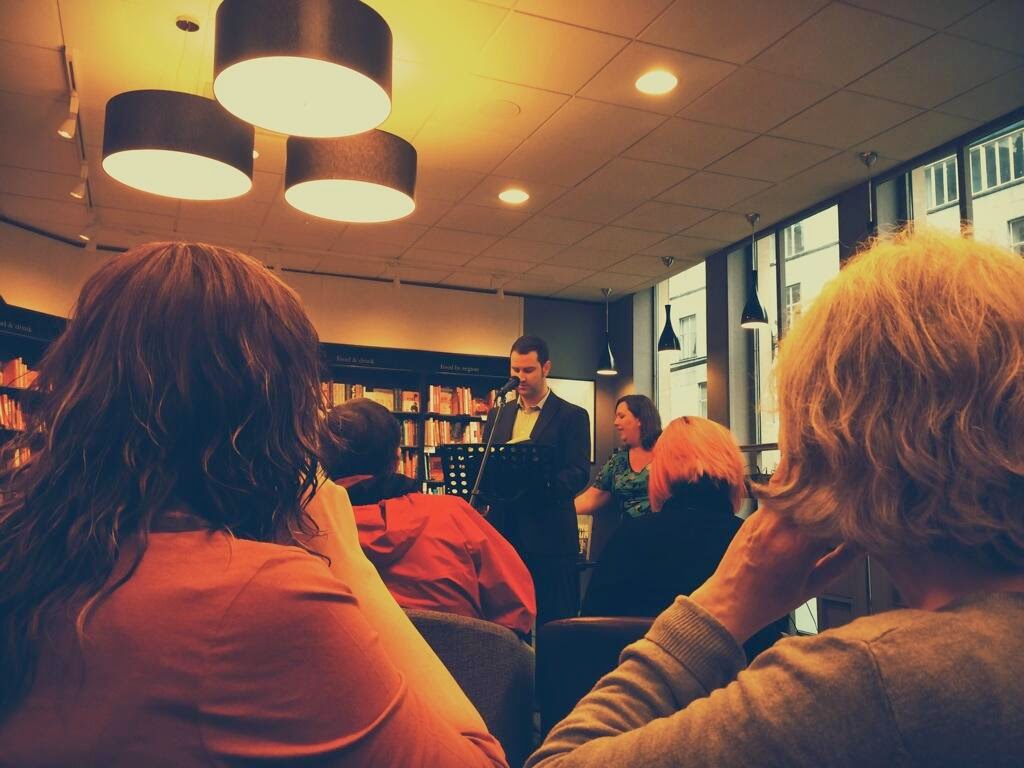 The 23rd and 24th April was a very cool couple of days, featuring a lot of firsts. If I wasn't a writer, and therefore theoretically supposed to be avoiding the most well-worn of clichés, I'd be forced to describe the day of the launch using the adjective 'whirlwind'. Let's all just agree that I thought up a more original and inspired metaphor than that and move on.
I kicked off the day with my first-ever interview with the media, for a story in my local newspaper that would be repurposed for a lot of the local Glasgow newspapers. That was followed up with my first interview on live radio, on East Coast FM. I think I did okay on both, for a newbie, but I knew this was just the warmup. The 23rd was launch night, which meant I would have to do a Q&A in front of a live audience. It was a steep learning curve: from talking to someone on the phone, to talking to someone on the phone with his radio audience listening in, to talking to someone in person with a hundred people staring at me.
My editor at Orion, Jemima Forrester, had travelled all the way up from London to Glasgow to be there for the launch event, and I was so pleased she was able to make it. Jemima has been one of the most important people in getting the book to this point, not just in the obvious way (signing me up for Orion), but in her dead-on suggestions and contributions to the book itself. My wife and I had a brief but very enjoyable dinner with Jemima before it was time to head down to Waterstones.
Caron Macpherson, manager of Waterstones Argyle Street, was doubling as talk show host for the evening, and being the hyper-organised person that she is, naturally had everything well in-hand. A big part of my ability to conquer pre-game nerves was the knowledge that all I had to do was show up and attempt to talk in coherent sentences. I knew everything else would be taken care of, and so it was.
We held off starting until a little after seven because people kept on arriving, until the point that there was standing room only. I never got around to doing a precise headcount, but I'm told there were over a hundred people, which was amazing. Just as amazing as the great turnout from family, friends and workmates was the fact that there were a few people there who didn't actually know me. 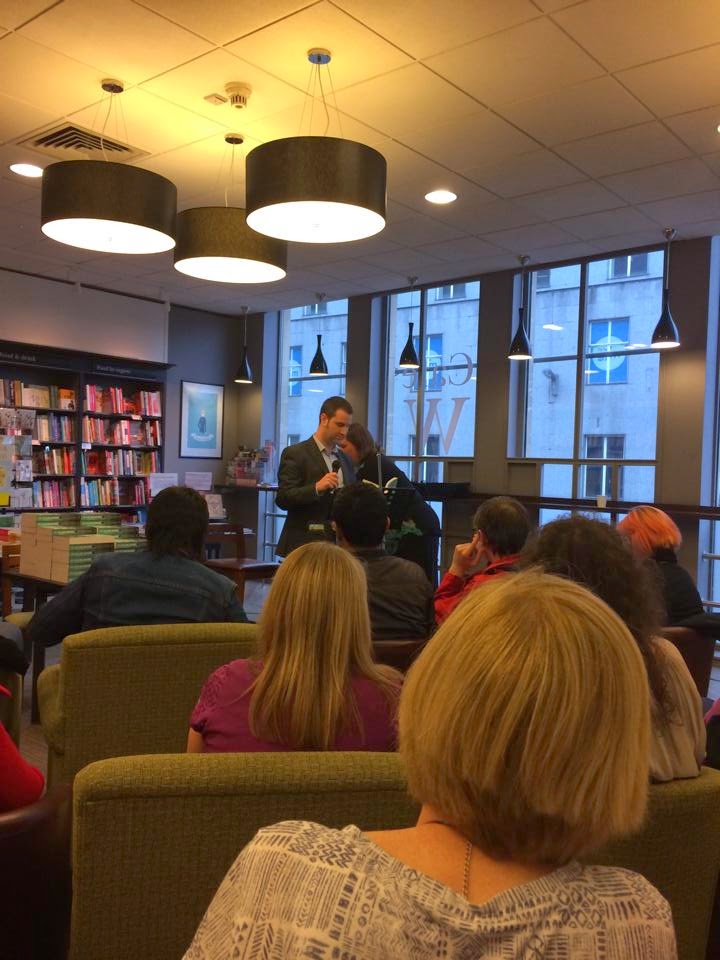 We began with the part I was most nervous about: the reading.

Now, you would think that a normal person would find this the least scary part of an event, as you're simply reading words that are in front of you (words that were written by you, even), but hey, I never said I was normal. I have a decent amount of experience in delivering presentations and even taking audience questions in a work context, but I was surprised at how different an experience it is to give a reading. I suppose that's because when you're giving a presentation, it's the information that's important, and you're trying to come across like this is all off the top of your head.

A reading is much more like a performance: you have to give a lot more thought to everything than I'm used to: how loud you speak, how quickly you read, how you differentiate dialogue from narration. Taking some advice, I picked a nice short excerpt from The Killing Season that would take me about five minutes to read. I practiced a lot, terrified of fumbling the words, and I seemed to pull it off okay on the night. Even so, it was almost a relief to sit down and begin the interview segment. 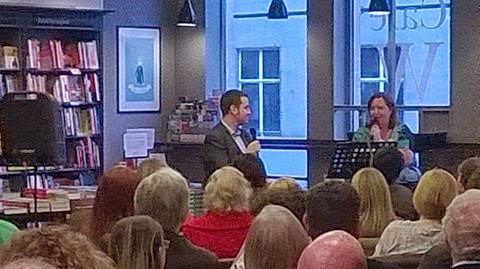 Caron had politely declined to share her planned questions with me, and I'm glad she did. I'd only have prepared detailed answers and proceeded to sound like a robot while reciting them. I was able to answer most questions okay, I think (I ought to be, being the guy who wrote the book and all), and the only ones that stumped me were Who should play Carter Blake in a movie? and, surprisingly, What's the best book you've read in the last year?
I read so much that this was a tough one - I can think of lots of standout books I've read over the past twelve months, but picking 'the best' is a tall order. With the luxury of hindsight... I still can't pick one outright winner. Sorry. I'd probably say the top three last year was Stephen King's Joyland, Michael Connelly's Gods of Guilt and Ian Fleming's From Russia, With Love. The last of which doesn't really count as I'd read it before, but this time I really liked it.
But I digress. After Caron's expert questioning, we took some questions from the audience. I think these went all right too, and as I'd expected there were questions about my writing process and my influences. There was one tough question from my fellow author Alexandra Sokoloff about whether I'd wanted to say something about America in the book. I didn't have a pat answer for this one, other than that I didn't set out to write a 'message' book, just to tell a good story. That said, I think the story does end up saying something about America, and the modern world in general, in the way the politics of fear drive the plot and some of the characters.
And after some great questions, we were onto the really fun part: the signing. 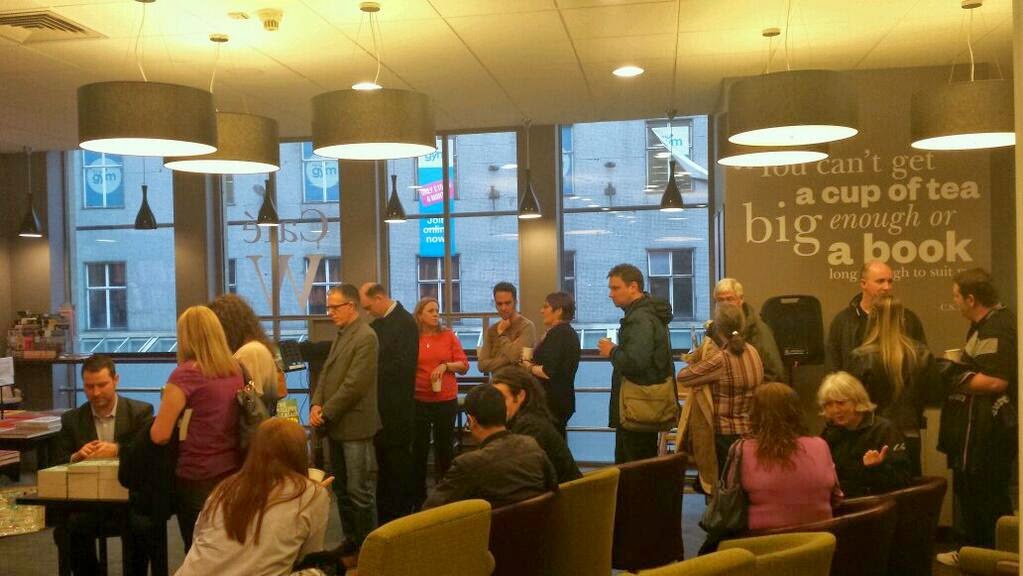 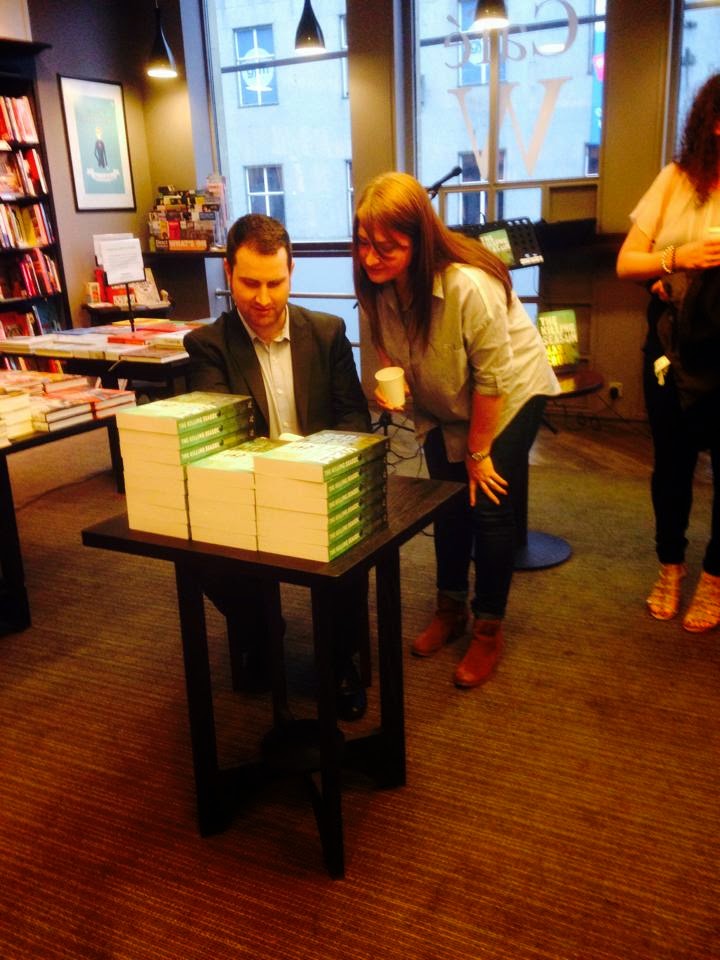 This was one of those moments that makes you question whether you've won a competition to pretend to be a writer for a day. People lining up to talk to me and wanting me to sign their copy of my book - I'm not sure it gets better than that. Because so many people I knew had come along, I had quite a queue, but again I was really gratified to see some unfamiliar faces as well. I spoke to people I hadn't seen in ages, met some new people, signed a lot of copies of The Killing Season and before I knew it, it was time to head along to the post-launch soirée at Sloans. 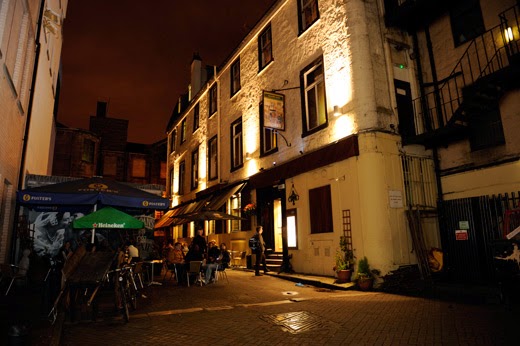 Sloans is one of Glasgow's oldest pubs, apparently established in 1797, and it's a cool place: spreading over several floors of a big old townhouse that adjoins the Argyle Arcade, Glasgow's jewellery hub. We had the first floor booked out, and it was set up more like a living room than a bar, with couches and candles. It was an evocative venue to get together with friends after the show, and it was great to relax with a few drinks and contemplate the next day: the day my first novel would be published.
On Thursday 24th April, I woke up without too much of a hangover and contemplated existence in a world where The Killing Season was suddenly a real book you could walk into a shop and buy, rather than some scribbles on a page or a computer file.
Just to check it wasn't a dream, I headed into Glasgow and checked the book was still there. It was. Caron asked me to sign some of the store copies and suggested I hit some of the other Waterstones branches to sign stock there too. I conducted a mini-tour of Waterstones branches in the West of Scotland over the next few days, notching up Glasgow Sauchiehall Street, Braehead, East Kilbride, Newton Mearns and Ayr. I even made a trip east to Scotland's runner-up city to sign stock in a couple of the Edinburgh branches.
One final nice surprise when I dropped into Argyle Street the following week, and it's down to the fact that Waterstones branches compile their own local sales charts.
Even though I know the results had been skewed somewhat by the number of copies I sold on my launch night, it was pretty cool to see The Killing Season on the shelves in this position, if only for one week: 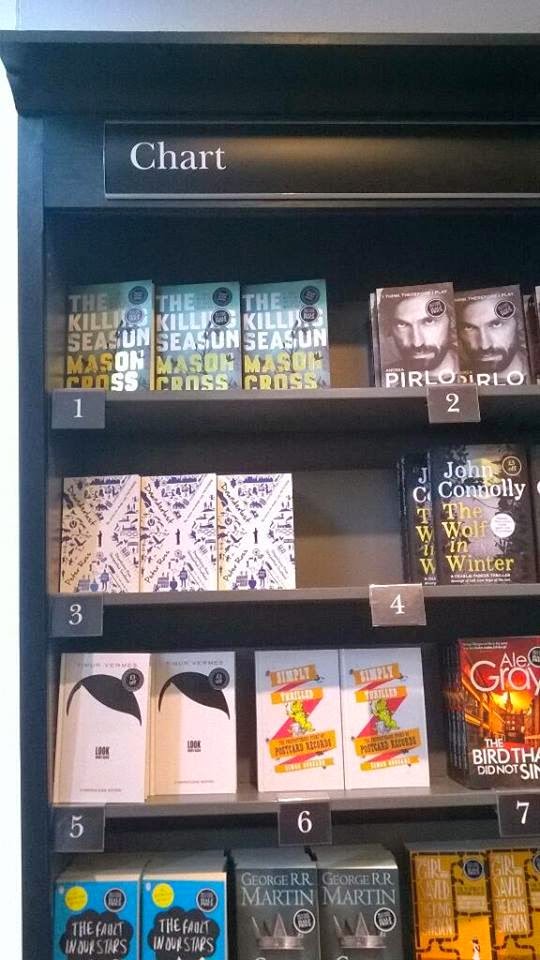 Let's hope it gets to be number one again, some other week.
Posted by Mason Cross at 10:44

Email ThisBlogThis!Share to TwitterShare to FacebookShare to Pinterest
Labels: launch, number one, The Killing Season, Waterstones