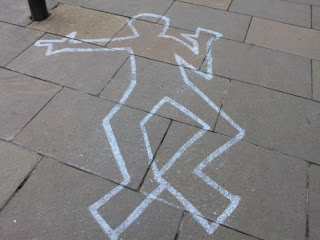 I've been working flat out on the latest draft of the new Carter Blake book (the one that comes after The Killing Season), so I haven't had time to blog about my trip to Bloody Scotland. It was a lot of fun, and I even managed to get some writing done in between talks and beers. I've been to a few one-off events at literary festivals before, but this was my first full-blown crime writing festival.

It's a pretty new festival, in only its second year, but is already attracting attendees and big-name writers in droves. The first thing that really struck me was how well organised it was. Teams of volunteers on hand to direct you to the correct suite in the correct venue, talks that started and finished perfectly on time, well-ordered signings. Generally the operation seemed to work like a well-oiled AK47.

The second thing that struck me was how... integrated the whole thing felt. In a good way. There was no real attempt at demarcation between rank and file paying customers and the talent. Big-name authors were milling about the venues and buying drinks in the bar. There was no velvet rope separating the readers from the writers. Which was just as well, because almost everybody I met was both. I met a lot of cool people, both fans and authors, and got some great ideas and advice.

The centrepiece of the festival was the Scottish Crime Novel of the Year dinner on Saturday night. The guest authors were sprinkled liberally around the tables, so that everyone had a 'name' writer at the table. I got Craig Robertson, and took full advantage of the fact by interrogating him about the best way to be a working crime writer. Craig gave me some great advice and told me that as a writer with an agent and a book deal, I'm now eligible to join the Crime Writers Association. By coincidence, I had recently picked up Craig's Cold Grave, which has now moved to the next slot on my to-read list.

I went along to see my fellow Orion author Denise Mina talking about her experiences working for DC Comics, and particularly adapting Girl With the Dragon Tattoo for the medium. Denise was great as always (intimidatingly great - she could pretty much give up the writing and get paid for going around the world giving interesting talks), and it was interesting to hear about the process of adapting a novel into the graphic medium and the importance of being nice to artists. Interestingly, the crowd was mostly crime readers rather than comic readers, and Denise had to explain to them the age-old split between Marvel and DC fans. I've actually never really been firmly on one side or the other, and I can't understand people that refuse to read a book purely based on which company publishes it, but there you go. If you push me, I guess I'm a Marvel guy, but I like Batman better than any Marvel character.

Mark Billingham and Stuart Neville teamed up for a great event called Masters of the Dark, and the topics ranged from the pros and cons of killing off a series character to real-life policing anecdotes that would sound ridiculous if you tried to put them in a work of fiction. As someone once said, just because it happened doesn't mean it's believeable.

I went along to see Craig Robertson (along with Chris Carter this time) for a fascinating talk on serial killers, both fictional and real. It was great timing for me, as I'm currently finishing off a serial killer novel, and it was both comforting and alarming to discover there are other people who sit around all day thinking up ingenious ways to get away with murder. I'd love to read a medical thesis someday on the crossover between serial killers and crime fiction authors.

The festival closed with the main attraction: Lee Child. I've been a massive fan of Lee's since I picked up my first Reacher book a few years ago, and he didn't disappoint in person. He covered a lot of ground onstage, from his own life story to the deceptive heights of Hollywood stars. As a writer, I was particularly interested in what he had to say about the genesis of Reacher, and how so much of what is fundamental about the character (his lack of a supporting cast, freedom from a drinking problem, his approach to laundry, even his name) came about as a reaction to a lot of the existing conventions in crime fiction. He also gave us a glimpse into Reacher's future, and at an eventual end-point to the series.

I stuck around for the signing and got to meet Lee in person. He was friendly, approachable and cool, like most of the thriller authors I've met. I got him to sign Never Go Back for my wife, who's also a big Reacher fan (she had stayed at home with the kids to let me go to the festival, so I thought she really deserved it).

After that, I got back in the car and headed home to get back to work on book two. Killing Season will have been out for a few months this time next year, so it would be nice to come back to the festival as a published author, as well as a fan.
Posted by Mason Cross at 14:42